So this is a bit of a shift in pricing, Intels last generation HEDT were very expensive which allowed AMD to gain some traction over Intel. This time around the pricing is closer together, AMD is more expensive but you get more cores, PCIe support etc.

It is also worth noting if you are building an AMD rig you will need a TRX40 motherboard and these start out at £409.99 on Scan for the ASUS Prime TRX40-Pro.

Intel on the other hand still uses the X299 socket and these start off at just £144.98 for the Gigabyte X299 AORUS Gaming, with £400 getting you something mid-range like the ASRock Intel X299 Taichi CLX.

So Intel technically has the advantage in terms of pricing – something that could not be said in the past. 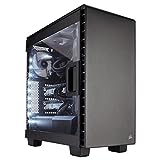 Data Source and test Set up

This data is sourced from Anandtech & Bit-Tech – both sites have reviewed both CPUs recently so their data should be quite accurate for comparisons.

The full reviews can be found here:

For the Anandtech on the AMD system, they have a MSI GTX 1080 Gaming 8G with Corsair Dominator Platinum RGB 8×8 GB DDR4-3200 and a Crucial MX500 2TB. The motherboard is the Asus ROG Zenith II Extreme.

For Bit-Tech, for AMD they also use the Asus ROG Zenith II Extreme, which is combined with 16GB (2 x 8GB) of Corsair 3,466MHz Vengeance Pro RGB DDR4 on both CPUs. They then use an EK Water Blocks EK-MLC Phoenix 240mm CPU cooler and Nvidia’s GeForce RTX 2070 Super Founders Edition.

The Intel system is essentially the same but with an MSI MEG X299 Creation motherboard.

The various content creation benchmarks are arguably the most important, it is unlikely you will be buying one of these CPUs purely for gaming.

At stock, the 3960X comfortably outperforms the Intel CPU is around 8% faster.

Similar results with HandBrake encoding. In the Bit-tech results, we see the AMD have a 17.5% gain over Intel. Even with an overclock the Intel still falls short of the AMD CPU by 9.6%.

For Anandtech, it looks a little closer with the AMD 3960X achieving 10 frames per second more than Intel which is just a 3.9% advantage.

Another disappointing result for Intel, being humiliated by the AMD CPU with a massive 39% difference in the score. Looking at this graph, PC mark heavily favours AMD.

Continuing the trend, at stock speed, the AMD CPU is 34% faster, the Intel overclocks well, but even with a significant boost from increased frequencies, Intel falls behind by 13% vs a stock AMD.

Things look a little more promising for Intel with the gaming benchmarks. In all the Final Fantasy XV tests, the Intel 10980XE has a small advantage. On the 8K standard test that is about 4% and the 720P test, it is a 2% difference.

In F1 2018 we see Intel get their best result against AMD with the 4K ultra test showing a 9.8% improvement in frames per second.

Moving over to Bit-Tech the trend is familiar with Intel being better than AMD for gaming. This test is a little peculiar though, at stock the Intel does not perform too well scoring 39% behind the AMD but it then jumps ahead and outperforms AMD by 17.7% both at stock and overclocked.

Again, Intel is not so great at stock but with an overclock they can get a 25% improvement over AMD.

As you can probably tell from the results, the AMD Ryzen Threadripper 3960X is bordering on useless when it comes to overclocking. Clearly, the 280W TDP is hard to tame. Bit-Tech managed to achieve 4.35GHz which is 150MHz down from the single-core boost but 250MHz higher than the all-core boost.

The Intel, on the other hand, does show some superb overclocking results, Bit-Tech managed to squeeze out 4.7GHz across all 18 cores but this was excessively hot, they then brought it down to a stable 4.5GHz. While this is promising, in general, the overclocks still left Intel underperforming against AMD.

The AMD CPU has a TDP of 280W while Intel has a more modest 165W TDP. A good indication of why one overclocks better than the other.

At idle running at stock speeds, Bit-Tech observed a power draw of 132W, under load this then hit 440W for the AMD. This increased to 172W and 526W with an overclock.

As you might expect, Intel was well below this at 128W and 376W. However, with the potential for an aggressive overclock these numbers jump up to 166/595W

I think it is quite clear than the new AMD Ryzen Threadripper 3960X comfortably outperforms the Intel Core i9-10980XE.

Overall though, if you want the best, AMD is probably the way to go. For content creators, making money off what they do on a PC, it is quite possible that the performance gains will reduce your productions times and justify the price difference.

If money is not an issue and you want the best performance, get the AMD Ryzen Threadripper 3960X