Facebook is rolling out a new set of updates for its professional Workplace platform, including an update for its Workplace Chat app, and dark mode options for the app.

As explained by Voica:

“The new Workplace Chat iOS app will be easier to use, significantly faster and smaller compared to the current app.”

To be clear, there is an existing Workplace Chat app which currently facilitates this same purpose, but the new version has been updated to make it more responsive, and easier to use for remote workers.

Workplace is also adding dark mode for both its desktop version and the mobile apps. 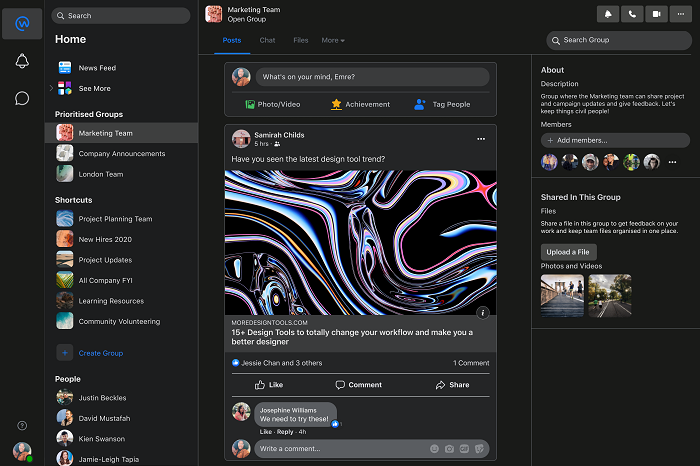 That, of course, will likely prompt questions as to when Facebook is going to add dark mode to its main app. And the current answer is ‘we don’t know’. Facebook expanded the testing of dark mode in its main app back in March, so it seems to be close, but no official details as yet.

While many businesses initially seemed hesitant about adopting Facebook Workplace, and having their internal communications connected to Facebook, the platform is growing, with the global lockdowns boosting interest as more businesses consider their remote working options.

Back in May, Facebook reported that Workplace was now up to 5 million users, and Facebook has continued to add new features and tools to the platform to make it a more appealing option.

It’s still a distance off competing with rival apps in the space, but it’s clear that Workplace is gaining traction, with the appeal of using familiar Facebook tools in a professional environment helping it gain favor with more businesses.

Add to that Facebook’s developing video connection tools, and you can see why more organizations are giving the platform another look. These new updates will further enhance the offering.