Facebook has announced a new News Feed algorithm update for news content, which will put more emphasis on original reporting, and boost content from news websites that provide information on their journalists, increasing transparency.

The change comes as more people are turning to Facebook for news content – according to Pew Research, around 68% of Americans now get at least some news content from social platforms, with Facebook the leading source. And with many local news outlets being forced to close due to the impacts of the COVID-19 pandemic, the reliance on Facebook for news, especially local updates, is only going to rise.

“When we ask people what kind of news they want to see on Facebook, they continually tell us they want news stories that are credible and informative. Today, we’re updating the way news stories are ranked in News Feed to prioritize original reporting and stories with transparent authorship.”

So what does that mean in practice?

As noted, the update focuses on two elements: ‘original reporting’ and ‘transparent authorship’.

On original reporting, Facebook says that it will now seek to identify and boost outlets that are the first to break a developing story or topic.

“We do this by looking at groups of articles on a particular story topic and identifying the ones most often cited as the original source. We’ll start by identifying original reporting in English language news and will do the same for news in other languages in the future.”

So, for example, last week, we covered the latest updates on Facebook’s dark mode roll out on mobile, for which I spoke to the team at Facebook and confirmed the relevant information. Because we were the first outlet to cover this in detail, theoretically, our story would get more reach, as it’s been cited by various sources as ‘first reported by’. But many other platforms have no doubt covered the same update since, without citing us. Using a range of these types of signals, Facebook will try to determine the original source, and amplify that reportage, where possible.

Though it could be a difficult one to actively enact. As Facebook notes:

“Most of the news stories people see in News Feed are from sources they or their friends follow, and that won’t change.”

News Feed distribution comes down to what individuals share – so Facebook can’t intervene and make people share the original report. People might prefer the analysis of another outlet, despite them not being the first to break the news – so how does Facebook get around that?

“When multiple stories are shared by publishers and are available in a person’s News Feed, we will boost the more original one which will help it get more distribution.”

Given the various factors, it’s hard to say how effective this approach will be – but the idea, on Facebook’s part, is that by boosting original, in-depth reporting, Facebook will be rewarding those outlets that invest time and money into their work.

“We know publishing this important journalism takes time and expertise, and we want to ensure it has a prioritized place on Facebook to incentivize its continued creation.”

The idea is good, we’ll have to wait and see how it goes in practice.

Facebook says that original news and reporting might see an increase in distribution as a result of these changes:

“…but it’s important to remember that News Feed uses a variety of ranking signals to prioritize content. We anticipate most news publishers won’t see significant changes to their distribution in News Feed as a result of these updates.”

The second element of the update looks at ‘Transparent Authorship’.

“We are also starting to demote news content that does not have transparent information about the publisher’s editorial staff. We will review news articles for bylines or a staff page on the publisher’s website that lists the first and last names of reporters or other editorial staff. We’ve found that publishers who do not include this information often lack credibility to readers and produce content with clickbait or ad farms, all content people tell us they don’t want to see on Facebook.”

Seems pretty straight-forward – if you’re publishing posts and not including the author’s name, you may need to re-think that approach, especially if you’re posting news content.

As Facebook notes, many re-posting websites will often swipe content from other, more reputable sources, and cut the authors’ names to avoid detection, while spam sites also look to churn out basic content in order to boost their links. As such, this measure seems to make sense.

In further notes, Facebook says that sites which do not have these elements could see reduced reach:

As with original reporting, the impacts are difficult to predict, as it’s also based on what individual users share. But if you want to maximize your Page post reach, it may be worth re-assessing your staff listings to ensure you’re providing transparency.

It’s interesting to also consider how both elements will play into Facebook’s new dedicated News tab, which is in the process of being rolled out. The News tab highlights publishers as chosen by Facebook – so this would also look to amplify the reach of reputable, original reporting, in addition to these algorithm-defined measures.

The combined tools could help Facebook refine its focus on higher quality reportage, and thus, improve the flow of credible information through its network.

In addition to the changes, Facebook has also published a new, 14-page overview of how the News Feed works in relation to news content.

The guide includes a range of notes and insights, which can help to provide a better understanding of the News Feed distribution process, with a particular focus on news content. 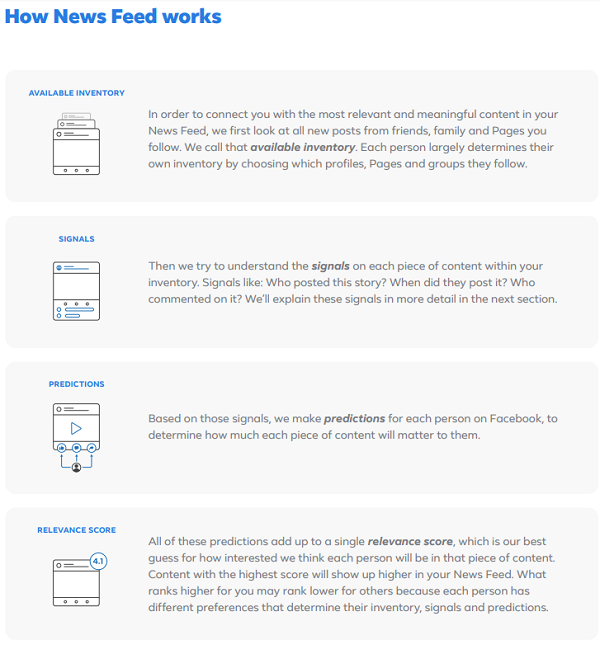 So, as noted earlier, posts that generate discussion will see more reach, even if they’re not based on original reporting.

“In recent years, we’ve also introduced additional signals to show people content that is worth their time and that they will likely find meaningful. These new signals are developed using survey data to predict what an individual may care about most.”

“We prioritize local news so that you can see topics that have a direct impact on you and your community and discover what’s happening in your local area. We identify local publishers as those whose links are clicked on by readers in a tight geographic area.”

Again, given the impacts of COVID-19 on local news publishers, this could be key – there might be fewer local news outlets available, but people will still want news on what’s happening in their region. As a result, many of these users will now be turning to local Facebook groups, which could eventually see local news providers publishing directly on Facebook, via such groups.

Maybe, that’s the future of local news – lower distribution costs, via the platforms that connect with the most users. There is also, then, the challenge of monetization, and making that a viable business option, but maybe, through improved ad options for, say, live-streaming and content creators online, there could be a way to make this work.

It’s hard to know, but clearly, local publishers have been hit hard by COVID-19, and there’s going to be a period of re-adjustment as to how smaller-distribution news providers operate.

As such, this change could be increasingly relevant in helping to promote journalists who are doing the work.