I have previously reviewed the GameSir VX2 AimSwitch and the F4 Falcon, being impressed with both devices from this up and coming brand.

Recently, GameSir sent me their T4 Pro to review, which is a multi-platform Bluetooth gamepad which is support across almost all platforms. 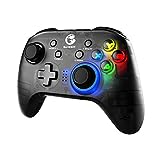 Via Bluetooth, you can connect to  Android, iOS, Switch It also works with the PC/Xbox, PS4 via a 2.4G Receiver or you can use it in the wired mode with the USB-Type C cable.

For phone gamers, there is a handy phone mount which attached to the controller

In general, you just need to pair this with your chosen device, but you will need to select the pairing mode for the specific device. So for PC and Android via the USB receiver, you would use X and Home. For a phone and Bluetooth, it is A and Home. Then Y and Home for the Nintendo Switch.

Some of the buttons can also be customised depending on the platform and game.

For example, you can set a turbo function which automatically quick presses a button for fast attacks. This is done by holding the button you want to assign then pressing the turbo button.

For the PC you have the option of using any of the three connectivity options of T4 Pro the USB cable, the 2.4 GHz wireless with the receiver dongle, or Bluetooth 4.0.

There is no Bluetooth dongle, but there is a 2.4Ghz dongle. Most devices connect via Bluetooth.

I only have the Nintendo Switch Lite, so the experience was not ideal here. However, it works well enough. With the Switch, you can use any of the programable buttons, but you do get to make the most of the 6-axis gyroscope.

Android is a little tricky, though this is not the fault of the controller. I mainly play COD on my phone, and at the moment, the controller does not support it. This seems to be an issue with the game itself.

In other games, such as PUBG, it works perfectly.

This works like most controllers for both the PC or Console.

It is a decent controller, but I generally prefer the Xbox controller on the PC, or the official PS4 controller for my console. However, the official controllers are over £45, so I wouldn’t expect the same quality, and this makes for a perfect secondary controller.

Priced at just £35.99 or as low as £23.48 if you import it from AliExpress there are few options that can compete. Many competing brands are compatible with either Android or Switch, not both.

PowerA MOGA XP5-A Plus Mobile Game Controller for Android, PC with Bluetooth/USB for £69.99, at that price, I would probably pass, but it is well-reviewed.

EasySMX Wireless Controller for Switch / Xbox 360/ Xbox One/ Mac (no iOS support) for £21.99 – it doesn’t state Android support, but the lack of a phone mount would make it awkward anyway.

The GameSir T4 Pro is another great device from the brand. It’s cross-device compatibility and low price point make it stand out from the crowd. In particular, its ability to work as a controller for Android gaming is what makes it appealing for me. I’d prefer to use official controllers elsewhere, but with this, I have an Android controller then can also use it as a secondary controller for my console.