Instagram has announced a new update for its standalone Threads app, which despite seemingly not gaining massive traction is still holding on, a year after its initial release.

As you may or may not recall, Threads is a messaging app for your Instagram inner circle – Threads provides a set of quick, easy options for sending text, photo and video updates to a selected group of friends, which are defined by your Instagram ‘close friends’ list.

But after a recent update to include all of your Instagram messages, not just those from close friends, Threads is now pretty much like every other messaging app, with its main differentiator being its ‘auto-status’ option, which allocates an emoji status without manual input, making an assumption of what you’re up to at any given time based on your location, your movement, your phone’s battery level, etc.

Now Instagram’s looking to give Threads some new tricks. First off, Instagram’s adding a new Status tab to help people keep up to date, and interact with their close friends’ statuses and stories.

As you can see here, Threads is now also getting a new tabbed navigation system, with three options to swipe through the app. That format is similar, in some ways, to Snapchat, with your status notifications from close friends on one side, then all of your Instagram message threads on the other, with the camera composer taking up the middle space.

The emphasis of the reformat is most clearly on status, and facilitating connection with friends through what they’re up to. Now, you’ll be able to skim through the Status listing and see, for example, which of your best pals are exercising, or having coffee, then maybe you can get in touch and go join them, facilitating in real-life connection (COVID-19 restrictions pending).

The message tab, as noted, is an extension of the full messaging functionality Instagram added to Threads last month, which gives Threads users access to all of their Instagram messages, not just those from people on their Close Friends listing. 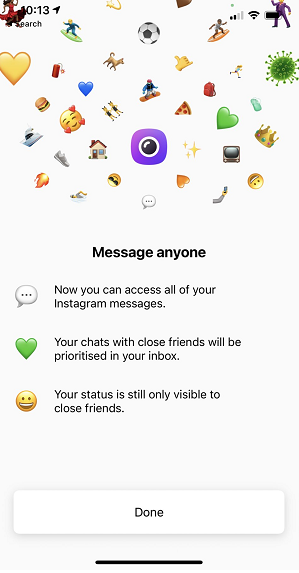 Interestingly, despite the recent integration of Messenger and Instagram messages, Messenger interactions will not be made available in Threads. So it’s your Instagram messages in another app, minus your Messenger chats, making it a less good version of Instagram Direct, but with emoji status updates.

Instagram says that Threads users can now also take a photo or video and share it to their Instagram Story via Threads. So there’s that, I guess.

As noted, Threads has struggled to gain any real momentum, so it’s somewhat surprising to see Instagram continuing to update the app.

In its first month after launch, Threads reached around 374k downloads, according to reports, which is significantly down on Instagram’s previous standalone apps, like IGTV and Boomerang. A look at the app’s performance on the App Annie charts since then suggests that Threads has struggled to gain any significant traction since. As we noted last month, if Threads is seeing an average of 200k active users, that wouldn’t be a huge surprise.

So why bother with it? Honestly, I’m not entirely sure.

The focus for Facebook’s messaging apps more broadly is clearly on integrating Messenger, Instagram Direct and WhatsApp, in order to make it easier for users to stay connected across its platforms. That opens up a range of opportunities for eCommerce, engagement, etc. But where Threads fits into that wider picture is unclear.

Do people really care about emoji status updates? Is that helping to keep users connected? Why couldn’t that just be shifted across to Instagram Direct?

It seems that of all the various functionalities being added into Instagram, which could be split into their own apps (IGTV, Reels, Stories), DMs are the least of its concerns.

But clearly, Instagram’s seeing something there.

If you’re an active Threads user, maybe this makes more sense to you.

The inbox tab is now available to all Threads users, while the Status tab will be rolled out from November 19th.