OPPO have a lot of amazing phones, I have always found they excel at the upper end of the market, in particular, the Find X2 Pro is probably the only £1k+ phone I would have been tempted to buy myself this year.

For their mid-range phones, they have always suffered a little in perceived value for money compared to the likes of Xiaomi and Realme.

Priced at £330 the OPPO Reno4 Z is far more competitive and makes a compelling choice for an affordable mid-range device. 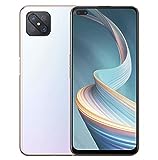 Face on; you wouldn’t be able to tell the difference between this and the Realme X50. They have almost identical dimensions and use literally the same display.

The OPPO is a smidgin thinner, and you can feel it too, it’s back is perfectly flat with no bevels on the edges, unlike other brands. I quite like the way it feels in my hand.

The rear camera arrangement is a square with the two main sensors raised higher than the others giving a line crossing over it. It is marginally more aesthetic than others, and the bump doesn’t bulge out excessively like some Xiaomi phones.

With it being an IPS display the fingerprint scanner is on the power button, it performs exactly the same as every other phone that has adopted this recently.

The display itself is good, with a screen brightness of 480nits it offers around the same brightness as similarly priced phones. On a bright summer day, you may have visibility issues, with it being November in the north of the UK, I have had no such issues so far. The 120Hz refresh rate is well established as being far superior to 60Hz now; it gives you the perception of using a much faster phone; everything is ultra-responsive with no jumpiness in the UI.

Interestingly this does have a 3.5mm headphone jack, while the X50 does not, at this price point I don’t think it is unreasonably to think users would prefer to have this jack available.

There does not appear to be any IP rating, but this is standard for mid-range phones.

The camera specification is your generic mid-range set up of:

On the front you get

While this may get advertised as a quad camera, only two of them are usable.

With mid-range phones often having 48MP or 64MP sensors, one of the main differences worth noting is which sensor is used. In this case, it is the Sony IMX 586, which seems to produce superior results than the Samsung equivalent. While it is a good sensor, the 64MP Sony IMX682 is used on the more affordable Realme 7 Pro and Poco X3.

While I am no camera expert, it does appear to offer some improved performance over the cheaper Poco with its higher resolution camera. Taking a photo of a fallen leaf either in normal mode or portrait mode offers a more realistic shot with a natural-looking bokeh. Most importantly the leaf itself has no blurring on it, unlike the Poco which offers an aggressive bokeh that creeps into the edges of the subject itself.

Night mode is generally good, there is no optical image stabilisation, so it is prone to blurriness, but with a steady hand this appears to again outperform similarly specced buy cheaper phones from Realme, even though the camera software appears to be essentially the same.

The camera can only shoot up to s 4K and 1080p video at up to 30fps. Slow-motion is limited to 1080P or 720P. If you are not using a gimbal, you will need to enable the ultra steady mode which offers improved digital stabilisation. One difference between COlourOS and Realme UI is that Realme have the Ultra Steady Max option and they generally offer 1080p/60fps recording too.

Overall, the camera is good for the price point.

I have previously covered the performance of the Reno4 Z and how it compares to the SD765G on the Realme X50.

For synthetic benchmarks, you are looking at a few percent difference here or there.

In terms of real-world performance, I can’t tell any difference between this or the Realme X50; both phones have a 120Hz IPS display, so you have the superb performance provided by the chipset but then also the incredible responsiveness and smoothness of a 120hz.

The Dimensity 800 offers incredible performance for the price you pay; you would have to be a serious gamer to feel like you need the performance the flagship SD865 offers.

Running the synthetic PC Mark battery test the phone scored an incredible 16 hours, easily beating the Realme X50 even though it has a physically larger battery.

With me working from home and not travelling, I typically charge every night, so never pushed the phone much beyond a day, but this should easily get through a day of heavy use and further with light usage.

Sadly the phone only comes with 18W charging, while this is perfectly fine 99% of the time, having the option for 30W+ charging is a big bonus when you are caught short on time and low on juice.

This runs ColorOS which is what Realme UI is based off, both being visually and functionally almost identical.

I have gotten used to it over the past year, so I have no strong feelings against it, I know others who are not fans, the same can be said for Xiaomi with MIUI and Huawei with EMUI.

Importantly, there is no unpleasant bloatware. Soloop is the only random app I can find, and this is uninstallable. Beyond that, there is GameSpace and Phone manager, both of which are moderately useful.

Like most Android skins, this will try and get you to log in to its own service, in this case, it is HeyTap, and it is one of the small differences between ColorOS and Realme UI (who don’t have anything). I rarely find much use for these and in this case didn’t bother to login in.

The RRP of this appears to be £329.99 which is reasonable for the specs you get, however, the price starts to look much more attractive when taken with a contract deal which can be as low as £21 per month with 54GB of data.

The Xiaomi Mi 10T Lite is a particularly tempting alternative, costing £100 less, it has less ram, storage and the SD750G won’t be quite as powerful, so the £100 difference is somewhat justified.

The Realme X50 is a very similar spec, but you get less ram and the SD765G chipset and faster charging. The software was a little rough around the edges when I reviewed it, so I prefer the Oppo, but I would expect things have improved in recent months.

Overall, I really like the OPPO Reno4 Z, it offers all the performance you could want from a phone without costing an arm and a leg. The Dimensity 800 is particularly impressive, offering high performance at a lower price point than equivalent Qualcomm phones.

A lot of the time, it is hard to tell the difference between ColourOS and Realme UI, but OPPO seems to be a little more refined and less buggy.

Oppo has one big advantage over Realme and Xiaomi; you can pick up their phones via contract. I know many people recommend buying SIM-free, but you can often pick up some amazing contract deals.

The best deal I can find is via Carphone Warehouse oo ID Mobile which uses the Three network. The ID Mobile network is not 5G but the deal is incredible.

If you can be bothered with the faff of a redemption deal, you can get this via mobiles.co.uk/Vodafone for £30 per month with 54GB of data and £216 cashback giving you a total cost of £505.00. That works out at £21pcm after cashback, just £1 more than you would likely pay for a SIM-only contract. Alternatively, if you take the RRP price of the phone, that makes the contract price £175 or just £7.29 per month.

It is deals like this that make the Oppo Reno4 Z are a particularly compelling choice over its rivals, which I often laud over.