Poco X3 NFC Review: An amazing budget phone but the Xiaomi Mi 10T Lite 5G may be a better buy

Launched last month, the Poco X3 NFC offers up a massive specification for your money, much like all the Poco phones proceeding it.

Even before I touched the phone, I knew it would inevitably be the best sub-£200 phone on the market. However, with the recent launch of the Xiaomi Mi 10T Lite you can get almost the same phone but with a more powerful 5G chipset for not much more. 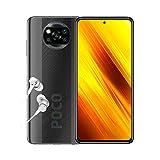 In my opinion, the X3 was unrivalled at launch, priced almost the same as the Realme 7, the Poco has a higher refresh rate display, superior 64MP Sony IMX682 sensor and larger resolution ultra-wide lens, a larger battery and faster charging. I’d also argue the SD732G is better than the Helio G95.

If you look at the phones, you can easily see that they are almost identical, the display is literally the same, as is the camera design on the rear.

However, the Mi 10T Lite 5G uses the latest Snapdragon 750 5G chipset from Qualcomm, this new chipset not only offers 5G connectivity but should offer considerably more performance.

The camera specification isn’t 100% identical though, they both use the excellent 64MP Sony IMX682 sensor, but the Poco X3 has a slightly larger 13MP ultra-wide-angle camera vs 8MP.

It is also worth noting that the Poco is listed as being IP53 rated, but the Xiaomi lists no ratings at all.

With the Xiaomi Mi 10T Lite 5G only just launching, you can currently get it for just £199, which is an amazing deal, and while it is that price, there is little reason to opt for the Poco X3.

Like most phones at this price point, it is an all-plastic build, though you can’t really tell at a passing glance. It is well made, and the plastic can handle a few more bumps than glass-backed premium phones.

I am not particularly fond of the overall design, I dislike the camera arrangement and massive bump, then the big Poco branding is a little crass for my liking. It is not something I would ever let put me off buying this phone, if I were keeping it, it would be in a case all the time, so the design is not an issue.

The Poco X3 has a 6.67-inch screen which may be too large for some, I have no issues with it, and I have relatively small hands for my size. The screen size makes this a little more gamer-friendly too.

Where the display falls down a little is the 450nits of brightness, I have previously expressed my dislike of IPS displays due to screen visibility issues in sunlight, and I would expect the same to apply here. It has been grey and miserable since getting the phone, so can’t confirm it. To be fair, it is a rare issue, especially for UK buyers, and at this price, most phones suffer from the same.

Like all other recent phones with an IPS display, the fingerprint scanner is located on the side where the power button is. It’s good if you are right-handed, not so much for lefties.

Unusually for many phones nowadays, this has an IR blaster allowing you to use an app to control your AV equipment. It also has a much loved 3.5mm headphone jack allowing you to opt for cheaper wired headphones.

I was very impressed with the 64 MP Sony IMX682 on the Realme 7 Pro, and the same applies here, it seems to be a superior sensor than the Samsung equivalent.

This is then complemented by a larger than average 13-megapixel ultra-wide sensor, and portrait sensor to help with bokeh and then the standard barely useful macro lens.

In good daylight, the primary camera can take superb shots, and I doubt any other sub-£200 phone could match it. The ultra-wide lens is good but with considerable barrel distortion, though this could be viewed as a nice arty effect.

Low light performance isn’t quite as good as I was expecting. This could be my poor camera skills, but it doesn’t seem to be as good as the Realme 7 Pro, which uses the same Sony sensor. The Mi 10T Pro is superb at low light, so Xiaomi knows how to do the software side of things. However, those are far more expensive phones, and I would say this is just as good as anything other phone around this price.

I have previously covered how the Snapdragon 732G on this phone compares to the MediaTek Helio 95 on the Realme 7. Similar to the SD720G vs Helio G90T, the two chipsets trade blows, MediaTek is slightly ahead for things like gaming and Antutu, but Qualcomm is superior with the CPU and overall efficiency.

The end result is the Snapdragon 732G is pretty much the most powerful 4G chipset on the market today. Previously you would have had to jump up to the much more expensive 5G SD765G to get better performance, but with the launch of Qualcomm’s two new SoCs things have changed a little.

In terms of real-world performance, this has more than enough performance for everything from productivity to gaming. Google used the lower-spec SD730G in the much more expensive Pixel 4a, and that has been universally praised, so you should have no concerns here.

For gaming, while it can handle all the games I played, you will, of course, have the graphics running lower than flagship devices.

You have a battery efficient Qualcomm Snapdragon 732G combined with a gigantic 5160 mAh battery. Battery life is never going to be a concern with this phone. I bet those a little more daring than me, with light usage could get 3-days worth of use out of it. I will stick to charging daily.

I was wowed by the battery performance of the Xiaomi Mi 10T Pro in the PC Mark 2.0 Battery Benchmark, getting the longest result in the of any phone I have used. This phone has come along and embarrassed it with a time of just short than 25 hours. Though this was inevitable with it having a bigger battery, lower-powered chipset and 120Hz screen, it was still extremely impressive to see.

This uses Android 10 with MIUI 12, and the overall software experience is the same as other recent Xiaomi phones. I don’t have too much of an issue with MIUI, it is fast, doesn’t feel too bloated with extras and there are limited additional apps.

Virus Scanning and How to Disable Adverts in MIUI 12

The one issue with MIUI I do have is this comes with some annoying adverts built into an already annoying security scan. Though, I feel like it is more forgivable on a £200 phone than on the Mi 10T Pro which also has it. Thankfully it is also an easy fix:

The 6GB/64GB model of this is £199 while the 6GB/128GB model is £229, there is no denying it is great value for money, and I think it is a better option than other brands, with Realme being the only viable alternative brand.

The Xiaomi Mi 10T Lite is the best alternative and almost certainly a better buy, however, it is £30 for the base model which may be a bit too much for some, and the 128GB model jumps up to £299 widening the gap between equivalent 128GB Poco.

I probably prefer the Realme 7 Pro to this thanks to its AMOLED display, but it is £50 when comparing the 128GB models and a lot more expensive than the £199 base spec of this.

OnePlus have just thrown their hat into the ring for budget phones, the Nord N100 is £20 cheaper than this, but the specification is nowhere near comparable, with a much lower spec chipset, 720p display and a low spec camera.

With such competitive pricing for Xiaomi and Poco devices, it is hard to criticise much about them. The Poco X3 is one of the best phones at this price there is, offering superb performance and a good quality camera for a bargain price.

If I had reviewed this at launch, I would say it is easily the best affordable phone on the market.

However, similar to my review of the Mi10T Pro, the main issue this has is Xiaomi and their relentless launch cycle offering up better buys within their own brand.

The Xiaomi Mi 10T Lite 5G is just £229 RRP and offers almost identical specs but a superior 5G Qualcomm Snapdragon 750G chipset. The Mi 10T Lite 5G has a slightly smaller battery and a lower resolution ultrawide camera, and no IP rating, that’s it.  At the end of the day, it is still more expensive than the X3, so if you have a hard budget of under £200 then the Poco X3 is the way to go (dependant on sales).