For the past 6 years or so I have used a proper server for
my NAS, first with the HP Microserver, then moving on to old PC hardware I no
longer use.

However, self build servers tend to be big, relatively
expensive and use up quite a bit of electricity. I wanted to use old drives in
RAID for a backup solution of my work which led me on the hunt for an
affordable NAS.

This led me to the TerraMaster F2-210 and I came away very impressed. It is about the cheapest solution out there but depending on your requirements it may be a little underpowered or lack some of the features people want from a NAS.

So I have spent some time scouring Amazon for the best Network
Attached Storage there is available. It is not necessarily a comprehensive list
of all NAS devices on the market, but it covers the main ones available on
Amazon.

Plex Server is a popular requirement for many people wanting a NAS, and the ability to transcode video provides a good point of reference for performance.

Some NAS devices state transcoding abilities above what I
have listed below. The Synology DiskStation DS218play is one notable example
where the product page clearly says 4K Ultra HD video transcoding. In this case,
I assume it is done through Video Station, whereas Plex clearly states that the
version of their app does not do any hardware transcoding for this NAS.

All my transcoding data is taken directly from the Plex NAS
Compatibility spreadsheet.

To the best of my knowledge, all the NAS devices have at
least gigabit ethernet. There are a couple of exceptions worth noting.

While Plex is popular, it is not the only piece of software people like to run on their NAS. So, before you commit to any device you should look into what else it offers you.

Synology doesn’t offer the best value for money in terms of hardware, but I think most people would agree they are a country mile ahead when it comes to their DSM software and the features it offers.

On the flip side of that, TerraMaster has offered everything
I need so far, and using Docker, Apache etc I am sure I can replicate any missing
features it has compared to Synology.

Some units have some unique hardware features too, Asustor
& QNAP have the option for improved ethernet performance. Asustor has
upgradable RAM, and they have HDMI out, so you can have it as an all in one NAS
and media player solution

If Plex is important, I would whittle down the choices to whatever suits your needs by transcoding capabilities. The TerraMaster F2-221 is a stand out choice being just £230 and can transcode 4K. 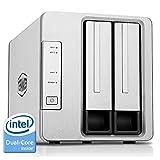 The Synology DS218+ is only £60 more, and it includes the vast array of features DSM has, which includes things like Surveillance Station allowing you to integrate CCTV cameras. I would probably stick with Synology if you want the NAS for business purposes too.

You can’t fault the TerraMaster F2-210 as the absolute budget option, but if you don’t care about Plex or other CPU intensive tasks then the Synology DS218j is only £8 more.