In its latest effort to protect the integrity of the US Presidential Election, Twitter is launching some new, preemptive prompts in user feeds which aim to address potential misinformation around the voting process, focusing on key elements that are being widely discussed, and could be misconstrued.

“The first prompt will confirm that voting by mail is safe and secure, and the second will remind people that there might be a delay in the announcement of election results. Both will link to Twitter Moments that provide more context and compile the latest credible information on the topic from election experts, journalists and other authoritative news sources.”

The prompts will be available in multiple languages and will appear in the home timeline of every person with a Twitter account located within the US, as well as in Search when people enter related terms, phrases or hashtags.

As noted, both of these elements have been subject to various concerns, with US President Donald Trump among those that have criticized the integrity of the mail-in voting process. Various experts have also raised the alarm about candidates potenially claiming victory prematurely, and causing confusion among the public, which is why Twitter is moving to add in more prompts to keep people informed, and ensure that there’s a greater understanding of the processes and systems in place. 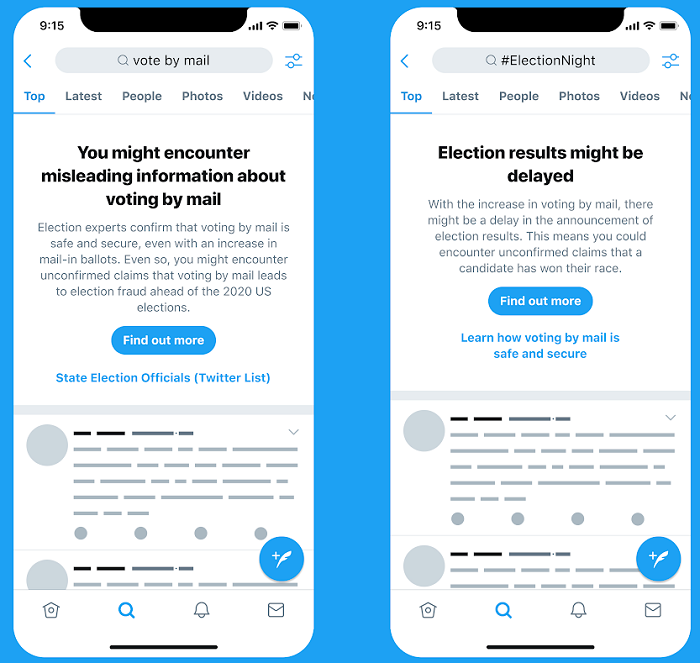 The prompts are the latest in a wide range of features that Twitter’s added for the election, including its Election Hub information tool and its alerts calling on all users to vote in the poll.

In many ways, Twitter has been more reactive than Facebook in responding to concerns around how social media can be misused by politically motivated groups, but Twitter also has far less influence than Facebook, so how significant those efforts will be, in the broader scheme, is difficult to say.

But Twitter’s doing what it can, and these new prompts are another measure to help ensure that it’s keeping people informed and up to date with relevant, timely information.