2nd Gen Ring Chime Pro Review – is the 2020 Chime Pro much better than the old one? And is the Pro model worth it?

I have covered Ring quite a bit now, while the company has had a few PR nightmares in the past year or so, they have addressed most of these issues. With little competition in the wire-free smart doorbell market, they are still the best option by a significant margin, and while not perfect, the Ring Doorbell has been one of my favourite pieces of tech in recent years (because I get millions of parcels).

The biggest issue with the doorbells is their truly awful Wi-Fi reception. Between the thick UK brick walls and presumably small Wi-Fi antennas they squeezed into the Ring, it can be challenging to get the RSSI number down.

The original Chime Pro was good, but has it improved much with the 2nd generation? 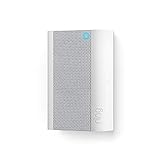 I always thought the Pro was just an added Wi-Fi extender, but there are actually quite a few differences, which help justify the £20 price difference.

The 2nd generation Chime Pro has had some significant upgrades from the previous generation:

If you look at the Amazon reviews, there appears to be some mixed opinion on how good the new Chime Pro is. A lot of the issues seem to come down to using the new Pro with an old doorbell.

I don’t have the old Doorbell 2 to test anymore, but I suspect the issue is when the new Chime Pro connects to a 5Ghz network (which it will likely do if you have one Wi-Fi network name/SSID), then try and pair it to an older model which is 2.4Ghz only.

This will inevitably cause set-up and performance issues. So if you are using the old doorbell and plan to use this I would make sure it is on the is 2.4Ghz network.

Set up is simple, go to the app, scan the barcode, wait for the light to flash green and connect to your chosen network.

The code you scan is on the back of the device, meaning I had to scan it, plug it in then wait. Normally I just plug things in then find out what I need to do to set it up. So it was a minor annoyance waiting for the light to flash green again.

The Chime will speak out clear instructions, so there are no beeps or flashes that you need to try and interpret.

Once the Chime Pro is working on your network, you can connect your Ring Doorbell to it. Once again, the code you need to complete this action is on the back of the Chime, forcing me to unplug it again.

With everything set up, things work well. The Chime itself is responsive, and you can customise the volume and chime noise to your liking.

The main selling point of the Pro is the Wi-Fi extender, and the Ring Doorbell Wi-Fi signal has always been problematic for me. I cover a lot of Wi-Fi routers and mesh systems, running 4 access points across my house, but the RSSI would often showing as poor.

I used to blame it to 2.4Ghz congestion, but the 5Ghz suffered from the same issue. However, the doorbell itself did seem more responsive. It is only recently when I added a fifth access point in my living room did the RSSI drop to OK levels.

I think the issue is the doorbell itself isn’t big enough for large Wi-Fi antennas, then in the UK we often have thick brick wall properties which love killing the Wi-Fi signal.

So I don’t technically need the Wi-Fi extender features. I now have so many access points I needed to disable a couple of them for the Chime to be able to offer an improvement.

In my scenario, at first with all my access points up, the performance dipped from 61 to 67 RSSI. Moving the plug to a different location dropped it back down to 62.

Moving back to connecting the doorbell to my normal home network, and switching off my new access point, the RSSI increased to 71. When I got the Ring Doorbell 3 Pro and used the 5Ghz network the RSSI went as high as 80 (though the performance was still OK).

So in case, and I suspect for many people, you will need to experiment a little on the best placement and Wi-Fi settings.

I would say that my Wi-Fi equipment offers a stronger signal than what the Chime Pro is capable of offering. So if it is possible to fit your own Wi-Fi extender, or better use a mesh Wi-Fi satellite, close to the door, you will likely achieve superior performance. At the end of the day, this is a £49 extender, which is quite cheap if you compare it to Wi-Fi networking equipment.

I have no strong feelings towards the night light at all, but you can have it on or off, so it is not detrimental in any way. If located in a hallway, I could see how it would be handy, though.

Normally I would list competing brands, but if you are reading a review of the Ring Chime Pro, it is safe to say you have a Ring Doorbell.

Amazon doesn’t list the old Chimes anymore, and Ring sells them for the same price. However, if you show about you can save a few quid on the older models. Currys has the old Chime Pro available for £39.

While I would strongly recommend one Chime in your house, I have found the doorbell and motion alerts on the Amazon Echo Dot to work just as well as the Chime. I guess it is not quite as loud, but I have a few dotted about the place, and you then have the added benefit of all the things Alexa offers. Currently, you can pick up the Amazon Echo Dot for £29.

The second-generation Ring Chime Pro is a decent upgrade from the original. I wouldn’t rush out to replace old for new, but if you want a new Chime Pro, then you are getting a much better device than you were a year ago.

The design is vastly improved, looking sleeker than the older model. I didn’t find much use for the nightlight, but it is a bonus feature, and would work well in a hallway at night.

The Wi-Fi extending feature works well if you have poor Wi-Fi, but there is no special tech here. It’s just an extender, so you could consider putting that £20 towards a Wi-Fi extender or mesh Wi-Fi system that would benefit all the devices in your home. However, it is only the Chime Pro that supports 5Ghz and has a nightlight, so there is £20 worth of extra features in there.

Overall, if I were buying the Ring Doorbell 3 as new, I would absolutely recommend investing in the Chime Pro. Even if you don’t feel you need the Wi-Fi extender, the £20 difference gives you some flexibility should you face signal issues, and also allows you to make the most of the 5Ghz network.