The Asus ROG Rapture GT-AXE11000 was announced back in September, but somehow, I completely missed it.

This is the first proper Wi-Fi 6E router to be announced. 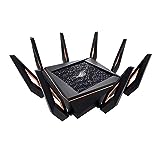 Looking at the hardware specs, not much has changed, the new router is bigger and heavier. Amazon lists a far bigger height, but I think this must include the antenna.

So, the only difference is that one of the triband radios has been switched from 5Ghz Wi-Fi 6 to the new 6Ghz Wi-Fi 6E channel.

Using 6Ghz increasing the number of 80Mhz channels available to the router from 6 to 14.

Then for 160Mhz channels, you get up to 7 channels from just 2(or 4 if you use split channels). None of these are part of the DFS spectrum, so you don’t have to worry about pesky things ling radar bothering your Wi-Fi, and this frequency should be mostly uncongested.

I live quite close to an airport and I have found that using 160Mhz on routers can be challenging, I generally can’t use DFS and even struggle using DFS with 80Mhz

Beyond that, everything is about the same.

No, but probably, with limitations. Wi-Fi 6E itself doesn’t offer any throughput increases over the Wi-Fi 6 you find on the GT-AX11000.

However, the 6Ghz network is both uncongested and has lots of 160Mhz channels, so it should be quite easy to run 160Mhz with nothing bothering it. So in theory, it should be possible to establish a strong 2400Mbps connection with no dips in performance.

The caveat to the benefits of 6Ghz, is that it has reduced range. Similar to how the 2.4Ghz channel offers much longer range vs 5Ghz, the 6Ghz frequency will be blocked out by objects (such as walls) more than the 5Ghz frequency.

I am struggling to find any data to give an idea of how well 6Ghz penetrates objects vs 5Ghz and 2.4Ghz. The best I could find was a site claiming 5Ghz has around 33% range vs 2.4Ghz, but I think this is just an arbitrary number.

So why is the Asus over 5 times more expensive?

The router is just a dual-band router only capable of 2.4Ghz and 5Ghz. This could be a cost-saving exercise (it is incredibly cheap, after all), or it could be the 6Ghz frequency is not approved for use in China yet.

The Xiaomi router does actually have a 2.5GbE port, which is very impressive for the money, then has 3 other gigabit ports.

The Xiaomi then uses a less powerful processor and will likely have far less software features than the Asus.

The Asus may still seem disproportionality priced vs the Xiaomi, but as always, the law of diminishing returns applies to high-end products. If you want the best, you are going to have to pay a steep price.

The Asus ROG Rapture GT-AXE11000 is a niche product for a select few users wanting the best of the best. It will be ideal for PC gamers who are unable to use wired ethernet, and hopefully, flagship phones of this year will be able to use it.

Wi-Fi 6E promises to be amazing, but in reality, it will probably take years feel the full benefits of it.