Earlier in the month, as part of the most recent topics update for Facebook Watch, Facebook noted that it was in the early stages of rolling out a new Organic Video Post Testing tool to help creators A/B test aspects of their video posts.

Now, it seems, some users are seeing that option, with this new ‘Create Post Tests’ option appearing for some users in the Creator Studio app.

As you can see in the screenshot, posted by Josh Withey of Yahoo UK (and shared by social media expert Matt Navarra), if you have access, the ‘Create Post Tests’ option will be highlighted to you next time you log into Creator Studio with a pop-up indicator on screen.

Within this, you can create up to four variations of a video post, which will then be ‘tested’ with a portion of your audience. Then, based on the parameters you set (i.e. impressions or time), Facebook will then give the ‘winning’ post further distribution beyond its initial test audience. 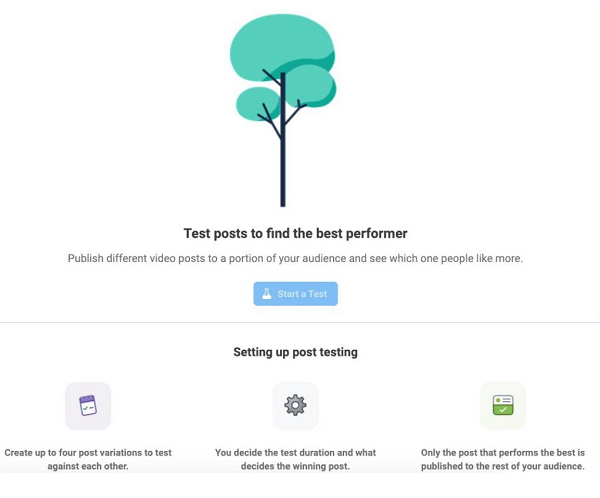 That sounds like an easy way to reaching a lot more people, right? With a portion of your audience being shown one of your initial test posts, then the winning post getting more reach.

Well, maybe – the new test option likely functions in the same way that Facebook’s current organic post testing process works, through which you can run tests, based on impressions or time, in order to maximize the reach of your best performers.

Organic post tests end when you either reach the combined total number of impressions that you indicate in your test parameters, which incorporates all variants of your test post, or you reach the time limit for the test. Within the test period, the posts that you’re testing don’t appear on your Page, but once the test is over, the winner is then published like a normal post.

Much of the organic post test functionality has now been moved from Pages to Creator Studio, which is where this new tool comes in – though as noted in the screenshots above, it’s primarily focused on video posts for now.

There are limitations on how many impressions you can expect to see within your tests, so you can’t necessarily use this it boost your reach for free, but it does give you another way to maximize post performance based on actual response, which could be a very helpful option. Facebook also has an option to A/B test ads as well, so there are various ways to get direct response feedback on your efforts.

At the moment, only a small subset of users have the option available, but Facebook is working on expanding the tool to more people based on initial data and feedback. It could be a good one to keep in mind, and to try out when it becomes available – and if you’re not making regular use of Creator Studio yet, it’s worth familiarizing yourself with the app, as this is increasingly where Facebook is looking to push more of its post and analytics options.

This is especially true for video uploads – as Facebook recently noted, Creator Studio is video focused, and where Facebook is looking to focus video posts.

This new functionality adds to its growing toolset, while you can also create and schedule posts, and even Stories, direct from the app.