With Facebook gaining momentum in the gaming market, The Social Network is looking to tap into the rising popularity of gaming during the COVID-19 pandemic with the launch of a new, dedicated Facebook Gaming app which incorporates gaming content, play options and groups.

The app will initially be available in Android, with iOS to follow soon.

As you can see above, Facbook Gaming has three key elements:

Facebook’s been testing the app in Southeast Asia and Latin America over the last 18 months, and as noted, with the popularity of gaming on the rise during the coronavirus lockdowns, it’s now taking it to the next stage of deployment.

But at the same time, this is not a sudden advancement in Facebook’s broader gaming ambitions.

Over the last few years, Facebook has launched a range of game-related tools and products, including live-stream tipping for gamers, and the capacity to easily stream via desktop overlaid onto gameplay footage. Facebook also recently launched a new, simplified tournament creation option to facilitate amateur gaming events within the app. 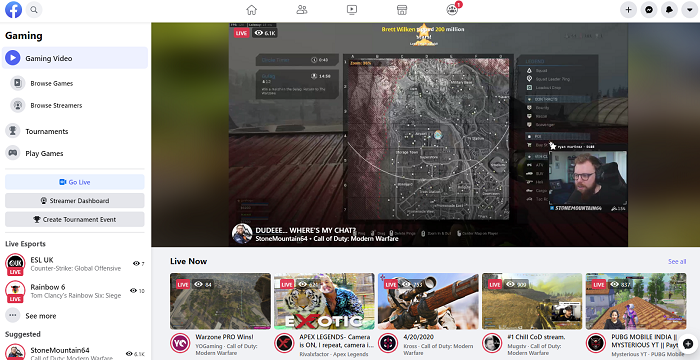 And those efforts are, indeed, paying off – in December 2019, Facebook saw a 210% YoY increase in hours watched via Facebook Gaming, giving it an 8.5% market share of the overall hours-watched for the gaming sector, as per data from StreamElements.

Given the resonance of gaming and gamer-related content in popular culture, this is an important element for Facebook to remain connected with, and while it still has a way to go to catch up to the main players, Facebook is growing its appeal, and is seeing more community response as a result.

And you can expect to see more on this front – as per Facebook’s Fidji Simo (via NYT):

Facebook’s dedicated gaming app will further add to this, providing more ways to keep gamers engaged, while Facebook will look to further build on its gaming credentials with the expansion of its VR tools over time.

Make no mistake, gaming is massive, and it’s only getting bigger. Given this, it makes sense for Facebook to double-down on its gaming initiatives where it can.