Back in December, in the midst of Facebook’s public offensive against Apple’s coming IDFA changes, in which it sought to frame itself as the champion of small business, and the free internet more broadly, we noted that:

“Maybe Facebook would be better off explaining to users why it collects so much data, and why they should allow it to continue, in order to provide them with a better experience. That’s a harder sell, but it could be more effective than this current framing.”

Now, that’s exactly what Facebook is doing – The Social Network has today launched a new ad campaign, which will include TV and digital promotions, that looks to better explain why personalized ad targeting is a good thing, and why people shouldn’t switch off data tracking.

As you can see, the campaign takes a more light-hearted approach to the subject, as opposed to Facebook’s previous, heavy-handed newspaper ads.

Given Facebook’s market dominance, and the fact that it has systematically reduced the organic reach of business Pages, including small businesses, over time, that message didn’t really seem to land with the public.

This new approach will instead look to better justify Facebook’s data tracking, in the hopes that users will leave their settings alone when they eventually get served see these new Apple prompts.

Apple’s IDFA changes are set to roll out soon, and are expected to see many people choose to block data tracking as a result. That, Facebook says, could have a major impact on ad effectiveness, which will increase promotional costs, and reduce discovery.

“Every business starts with an idea, and being able to share that idea through personalized ads is a game changer for small businesses […] Limiting the use of personalized ads would take away a vital growth engine for businesses.”

I mean, it might not be a ‘vital’ growth engine, but certainly, taking away personalization features will make it more difficult for businesses to maximize their campaigns. Most digital marketers are now scrambling to figure out alternative data-tracking options, with attribution, in particular, set to pose a particular challenge.

No one knows, of course, how significant the impact will be, because we don’t know how many people will choose to turn off tracking, but again, the projections are that many users will opt-out, limiting such capacity.

In addition to the new ad approach, Facebook has also outlined a range of other ways in which it’s looking to help SMBs, including:

Facebook has also launched a new mini-site to promote its new push. 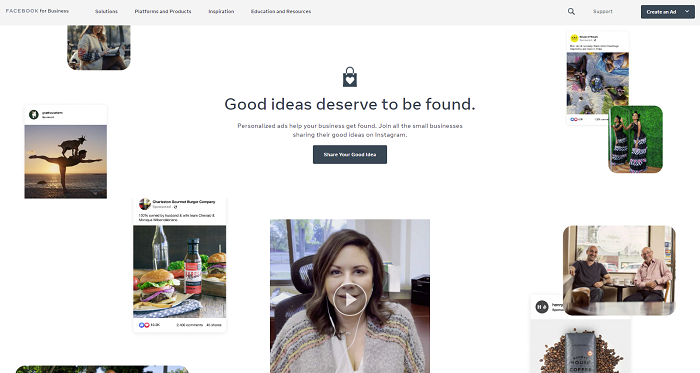 It’s difficult to predict whether this approach will work – as you can see in the above screenshots, the up-front nature of Apple’s coming IDFA alerts will prompt many to reconsider whether they want to allow such to continue. Combine that with very public incidents of data mishandling at Facebook (e.g. Cambridge Analytica), and a gradual decline in its public reputation in general, and it’s difficult to imagine many people delineating the highlighted benefits for SMBs and the subsequent benefits for Facebook.

As we saw with the recent backlash to the WhatsApp privacy changes, which many believed would have seen WhatsApp sharing user data with Facebook, the company’s reputation right now is not great, and while the framing here is about small businesses, not Facebook, it’s still Facebook-branded, which could negate the impact.

But it does seem like a better strategy than Facebook’s initial response, which tried to paint Apple as the bad guy. Apple quickly countered this by noting that it’s simply giving users the option to choose what data they share with app developers, which people should have more control over. That’s a good thing, and Apple’s angle, in this instance, seems to better align with rising public sentiment.

But Facebook is also correct in noting that the change will reduce the effectiveness of ads, which could increase outreach costs for SMBs.

But again, whether the public sees this as benefiting struggling businesses, or driving more revenue for Facebook, will be the defining factor.