After announcing its coming Election Information Center back in June, along with its intention to get 4 million more Americans to participate in the upcoming poll, Facebook has now officially launched its US Voting Information Center, which will be available within both Facebook and Instagram.

“The goal of the Voting Information Center, together with our registration efforts, is simple: to help every eligible voter in the US who uses our platform vote this year. It is also important that we help protect the integrity of our elections. This new product connects everyone on Facebook and Instagram to accurate and easy-to-find information about voting wherever they live, helping empower them to hold their elected officials accountable. It’s a nonpartisan effort that’s available to everyone, and we’ll send notifications at the top of Facebook and Instagram targeted by age and location so people of voting age see relevant information in their state.”

Getting more people to the polls is the key focus of the new push – as illustrated in this video, millions of Americans did not have their say in the 2016 US Presidential Election.

By using its massive scale to distribute accurate, timely election information, Facebook’s hoping that it will encourage more civic engagement. And based on past experiments, that very well could be the case.

Back in 2010, Facebook claims that it was able to encourage around 340,000 more people to take part in the US Congressional elections because of a single election-day message which it distributed as part of an experiment to test the platform’s capacity to influence voter behavior.

“About 611,000 users (1%) received an ‘informational message’ at the top of their news feeds, which encouraged them to vote, provided a link to information on local polling places and included a clickable ‘I voted’ button and a counter of Facebook users who had clicked it. About 60 million users (98%) received a ‘social message’, which included the same elements but also showed the profile pictures of up to six randomly selected Facebook friends who had clicked the ‘I voted’ button. The remaining 1% of users were assigned to a control group that received no message.”

The results of the test showed that users who received the informational message (the top message in the above image) voted at the same rate as those who saw no message at all – but those who saw the social message, with images of their friends included (lower example) were 2% more likely to click the ‘I voted’ button, and 0.4% more likely to head to the polls than the other group.

Based on this, Facebook’s researchers estimated that the social message directly increased voter turnout by 60,000 votes, while a further 280,000 people were “indirectly nudged to the polls” by seeing notifications that their friends had voted in their Facebook News Feed.

That experiment shows that Facebook can influence voter behavior – which is particularly interesting given Facebook’s more recent stances on the role it plays, or doesn’t, in impacting election outcomes.

After the 2016 US Presidential Election, Facebook CEO Mark Zuckerberg, when questioned about the role that Facebook, and fake news specifically, played in the eventual result, responded that:

“Personally I think the idea that fake news on Facebook, which is a very small amount of the content, influenced the election in any way – I think is a pretty crazy idea. Voters make decisions based on their lived experience.”

When Facebook had already shown, through its own experiment six years earlier, that content distributed on the platform could indeed influence election outcomes. It’s interesting to note that Facebook was aware of this well before the 2016 result, and the scrutiny and criticism of social platforms that came with it.

And while that test showed only a fractional result in getting more people to the polls, it was a small scale experiment, on a much smaller user base (Facebook had 608 million users in total in 2010). Facebook now has 2.6 billion active users, including 253 million in the US.

If you had any skepticism over Facebook’s latest effort to encourage more people to the polls, the data shows that it absolutely will do so. And the Voting Center will also serve additional purpose, beyond encouraging more participation.

Facebook’s Voting Center will also provide accurate information on how to vote, where to vote, and changed procedures due to COVID-19. That, in itself, could be massive, given the rumors of voter supression efforts and misinformation around COVID-19 lockdowns.

The Election Center will also provide alerts to keep users updated on any official changes to election procedures, as well as links to voting registration tools. 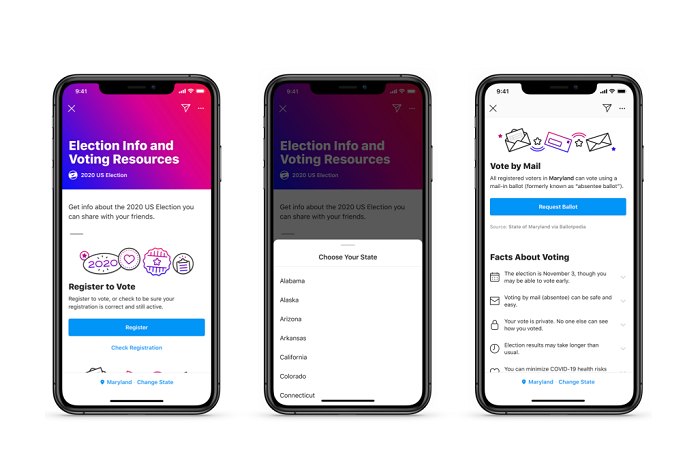 Make no mistake, Facebook’s election participation push could have a huge impact – and while that won’t necessarily change the eventual outcome, it will ensure that more Americans have their say, and get the President which best represents the majority of people.

In some ways, it may seem like Facebook’s making a big deal of this new push in order to distract from its other, more divisive policies, like its decision not to fact-check political ads. But this is not only a crucially important initiative, it also aligns with Facebook’s overall stance.

“I think people understand and appreciate the voice they have now. At some fundamental level, I think most people believe in their fellow people too.”

Zuckerberg believes that the people should be free to decide, based on everything they’ve seen from the candidates before them. True or not, controversial or not. Zuckerberg’s view is that Facebook should not censor politicians because voters need to know who, exactly, they’re supporting.

This push is the core of Facebook’s political content approach. Now we’ll see whether it actually does get more people to have their say.