Facebook is looking to help provide more context on posts, particularly those related to political issues, with a test of new labels which delineate whether the Page is a ‘public official’, a ‘fan page’ or a ‘satire page’.

As you can see in this example, the new labels will appear below the Page title on posts, which will provide immediate context as to why the Page might be posting what it is, which could help to reduce confusion.

Definitely, Facebook posts can prompt a lot of heated debate, with misinterpretation playing a big role. Indeed, Facebook’s own research has shown that basic misunderstandings can often be a key element in sparking online angst, so any additional context or explanatory information can only help in reducing confusion, and easing tensions.

No doubt you’ve seen such yourself – below various parody posts, there’ll often be angry comments and replies, which have clearly missed the point.

In fact, there’s a whole subreddit dedicated to these misunderstandings and misguided remarks. 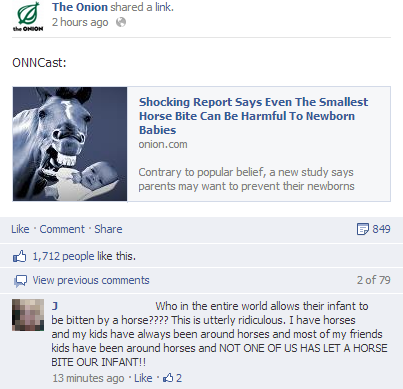 Given this, there’s clearly value in providing additional explanation where possible, and this seems like an unintrusive, simple way to alleviate some of those instances.

Will that help to reduce angst on Facebook overall?

I mean, it still seems like division and anger are key triggers in Facebook sharing, which has prompted broader societal division through amplification of such debates. But anything that can be done should at least be explored, and while this might be a lesser element, it could prove to be a valuable addition.

Facebook is currently testing the new labels with a small group of users in the US.