We all know that Honor is the affordable sub-brand of Huawei, the Honor V30 Pro is a superb alternative to the Huawei Mate 30 Pro for example. Sometimes they both release identical phones though, with the Huawei Nova 5T and Honor 20 being the notable recent example.

With the recent launch of the affordable Huawei MateBook D series which comes in 14 and 15-inch models, how similar are they to the just-announced Honor MagicBook 14 & 15.6? 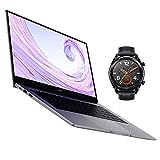 Suspiciously similar dimensions and weight there.

The MateBook D features the same and the exact spec from the
website states:

Apart from the display, the main thing that defines a laptop is the processor, the Honor has options for AMD Ryzen 3500U or 3700U. Both are based on AMD’s Zen+ architecture and built on a 12nm process. They come with the integrated AMD Vega 8 and Vega 10 graphics, respectively.

Unsurprisingly, the Honor has the same with the MagicBook 14
using the larger 56Wh battery, while its bigger sibling settles for a 42W one. Charging
is done via USB PD at 65W, through the single Type-C port, with a promised 0%
to 46% charge in 30 minutes.

So it is safe to assume, these are literally the same laptops,
just with different badges, they even have the same Space Gray colour.

Annoyingly, Honor has been very vague about their pricing, but MagicBook 14/15 will be available to buy in the UK, France, Germany, Czech Republic and other markets at the end of March, with pricing from €599 – UK price and availability updated at the bottom of the post.

For Huawei the pricing is:

With the Honor pricing being in Euros, I would hope it will land in the UK for under £599.99 while having an identical specification to the Huawei MateBook D 15 (2020).

It is worth noting that when the Huawei MateBook D launched if your pre-ordered you got a free pair of Huawei FreeBuds 3 (White) which are worth £115 based on today prices. Hopefully, Honor will have a pre-order bonus too.

Overall, this is good for consumers, you have two identical laptops which allow you to show around and pick whatever is cheapest. Honor does have more hardware choice too, so if you want something with a little more oomph then the Ryzen 3700U based models should make an excellent choice.

[Update] The Honor MagicBook 14 now has a confirmed launch date and price. The laptop will be available from Amazon and Argos on the 7th of April with a base price of £550 – This gets you an AMD Ryzen 5 3500U CPU, Radeon Vega 8 GPU, 8GB DDR4 RAM and 256GB PCIe SSD storage.

The Matebook D linked above that costs £650 comes with a 512GB drive vs 256GB in the MagicBook. The Matebook comes with a free Huawei Watch GT (the original model not the GT2), this sells for £97 on Amazon, so if you wanted the GT in the first place, this is a great deal, but you could also easily sell for £50.

Overall, they are both good deals, but if you want the option with the best cash price then the MagicBook 14 is your best bet.