Today, Huawei has introduced a new model to their MateBook 13 series. Previously the two available options used the lates 10th Gen Intel chips with the options being i5-10210U or the i7-10510U.

The new model comes at a much lower price point while offering similar CPU performance, but falls a little behind for gaming and editing due to the Intel models having a discrete GPU.

With the much more attractive pricing, this looks like a great ultrabook. 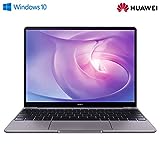 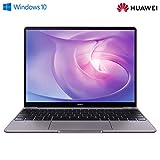 Depending on what you plan to do, the AMD Ryzen 5 3500U could potentially offer more performance. The CPU of the Intel is generally for single core CPU benchmarks, but AMD is is better for multi-core. The Intel models have the benefit of the GeForce MX250 discrete GPU

The following benchmarks are not from the Huawei models but should represent the rough performance difference.

With the GPU, the Intel models can take advantage of the discrete GPU, so while the iGPU of the Intel is not very good, these laptops will out perform the AMD models in gaming.

Then in Apex legends, with the same settings, the MX250 manages 58fps vs 50fps. 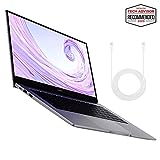 When I first saw this press release, I assumed it was a refresh of the Matebook D that was recently launched and has been particularly popular.

Smaller and lighter laptops normally come with a high price premium, so this only being £50 more is quite impressive.

5 processor embedded in the latest Huawei notebook ensures powerful performance whenever the users are in school, at work, or out and about.  Designed for young professionals, the 13-inch notebook combines the HUAWEI FullView Display, incredible portability and premium build quality with Huawei Share capabilities such as Multi-screen Collaboration to drive maximum experience across all user scenarios.

The HUAWEI MateBook Series represents both Huawei’s experience in mobile innovation and its commitment to creating products of the highest quality. HUAWEI MateBook 13 AMD Edition features the series’ signature design and a 2K HUAWEI FullView display that comes with an 88 per cent screen-to-body ratio, and is powered by the Ryzen 5 3500U processor as well as Radeon

“As one of the primary productivity devices that consumers use on a daily basis, notebooks play a major role in our All-scenario Seamless AI Life strategy.” said Wang Yinfeng, President of PC and Tablet Business, Huawei Consumer BG. “In the future, smart devices regardless of form factors will all be interconnected, all working collaboratively for the benefit of consumers. With the new Multi-screen Collaboration feature in the new HUAWEI MateBook 13 AMD Edition, we are taking a step closer towards that direction, offering consumers tomorrow’s experiences today, in a powerful, portable and refined package.”

The HUAWEI MateBook 13 AMD Edition takes the HUAWEI FullView design to the next level with an industry-leading screen-to-body ratio of 88 per cent. With side bezels measuring 4.4mm each, the HUAWEI MateBook 13 AMD Edition offers an expansive viewing experience without compromising on the portability. The 3:2 aspect ratio also provides more vertical screen space than its 16:9 counterparts, and is more suited for productivity apps such as word processors.

The resolution of the display on a notebook plays a key role in delivering a quality user experience. Therefore, a high-resolution display has been a staple of Huawei’s notebooks since the very beginning. The new HUAWEI MateBook 13 AMD Edition features a 2K display (2160×1440 at 200ppi) with a contrast ratio of 1000:1 and supports 100 per cent of the RGB colour gamut. Content across all media types are displayed vivid details with impeccable colour accuracy and responsiveness.

HUAWEI MateBook 13 AMD Edition features a metallic, minimalist design. The edges are smoothly curved with aluminium chamfers cut with CNC diamond cutting. With dimensions of 286 x 211 x 14.9mm and a weight of about 1.31kg, the notebook is in the ideal form factor for users who are always on the go.

The HUAWEI MateBook 13 is powered by an AMD Ryzen 5 3500U processor and Radeon Vega 8 Graphics. Everything from word processing to video rendering can be done quickly and efficiently while on the go thanks to Huawei’s targeted optimisations that unleash the full potential of the hardware. The notebook is also equipped with dual-channel DDR4 RAM and a high-speed PCIe NVMe SSD to provide adequate memory and storage for even the most demanding tasks.

With performance comes a need for proper cooling. The HUAWEI MateBook 13 AMD Edition features an advanced cooling system that uses the HUAWEI Shark Fin 2.0. Inspired by its namesake, the fans spin at a high rate to create a high airflow for maximum cooling performance. In addition, the Intelligent filtering solution monitors temperature change in real time, ensuring stable performance with minimal noise at all times.

Multi-screen Collaboration makes not only cross-device file transfers easier than ever; it eliminates the physical limitations between a Windows PC and an Android smartphone, allowing users to seamlessly control two devices simultaneously on a single display. Peripherals connected to the HUAWEI MateBook can also conveniently be used as input devices for the smartphone. The laptop is able to share more advanced office applications with your phone to uncover a brand new office experience that includes the phone, for a much more secure and convenient office environment.

To match the device unlocking experience that today’s smartphones offer, Huawei optimised the BIOS firmware on the HUAWEI MateBook 13 AMD Edition for speed. The Fingerprint Power Button has an integrated fingerprint reader that authenticates the user’s identity on power up, so users can securely boot into Windows with just one press.

Designed to support a highly mobile workforce, the HUAWEI MateBook 13 AMD Edition comes with a 65W USB-C pocket charger that supports a range of charging outputs. As well as using the power adapter to charge your notebook, it also supports HUAWEI Super Charge for certain phones.