As part of the Huawei P40 Pro launch and a new variant of the Huawei Watch GT2 was launched, the GT2e. Aesthetically they are quite different, but in terms of features, they are almost identical. However, this new watch comes in at £159.99, 30% lower than the launch price of the GT2. 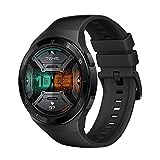 Features the watch does have

I noticed that when the Huawei GT watches get posted to the likes of HotUKDeals, there is some confusion about what the watches do and do not do. So hopefully this will clear things up.

Features the watch does not have

There is almost no significant difference between the two watches in terms of functionality. The minor differences include:

To re-iterate what I covered in my original Huawei Watch GT2. The smartwatch landscape is a bit of a mess. If you use an iPhone just get an Apple Watch, or if you a fitness orientated whatever Garmin suits your needs and budget.

For everyone else, it is a mess. WearOS should be superb, but it has been dogged by lack of development by Google and glacially slow chipset development from Qualcomm. Many companies appear to have given up with it, with the Fossil group covering multiple brands, probably the biggest name in the business. Suunto recently made the daring move to launch a multi-sport watch based on it, and it looks amazing, but it is expensive and has the typical poor battery life of WearOS.

Samsung is arguably the best option for an actual smartwatch on Android. They use Tizen which doesn’t have quite the app support as WearOS, but they do have a superior battery performance.

You then have Fitbit and their Vera watches which have FitbitOS developed from the Pebble OS, but lack of developer support limits its smartwatch ability.

Garmin is next with a glorified feature watch, you can sort of install apps on them, recent watches have music and NFC payments via Garmin Pay. They are also the market leader for multisports watches.

Finally, there is Huawei, these watches are not really smartwatches but feature watches, you get what you get given, and in return, you are treated with a battery life that eclipses every other device on the market.  It is a big trade-off, but it seems to work well for Huawei.

Strava Support and other third-party apps

Very frustratingly, Huawei continues to not support anything other than Huawei Health, Google Fit, and MyFitnessPal. It looks like Huawei have no intention of supporting this, and the one workaround I found no longer appears to work.

On this community thread, the Huawei support staff state:

“In this situation, Strava and Huawei Health app have similar functions; therefore you can use the Huawei Health App instead of the third-party app like Strava to track cycling and running exercises.”

Which is an annoyingly short sighted response. The Huawei Health app lacks a significant amount of functionality Strava and others offer. In particular, there is no community aspect to it at all, there is no proper log of personal bests, just longest run and best pace, and there is no way to search or compare exercises.

It wouldn’t annoy me that much, but this and the GT2 are both fantastic fitness watches and would be perfectly viable options for anyone serious about fitness and a superb alternative to Garmin if there was any kind of data export.

When I reviewed the GT2, it had 8 First Beat features, at some point, this expanded to 9 and it looks like they added a race time predictor based on your VO2 Max.

Day to day performance is excellent; this does everything I want from a smartwatch, it tracks my steps, resting heart rate, sleep, stress, and pushes notifications from my phone for any app I select.

Some people want more functionality, but that is perfect for me.

Phone notifications seem to default to just messaging apps, but if you go into your settings, you can then set it for whatever app you want. So, for me, I always add Ring to the notifications, so I never miss a delivery.

Fitness tracking, in general, is very good, providing all the data you will likely want as well as providing good explanations of things.

On top of the usual things like distance, heart rate, calories and speed, when running it will tell you your cadence and stride length.

When you finish your activity, you have aerobic and anaerobic training effect plus the recovery time. You can then analyse lots of graphs. The data provided is easily good enough to compete with watches much more expensive than this.

There are none. This is a fundamental flaw of the Huawei Health App and why most people like to export to Strava.

Due to the current outdoor restrictions, my testing here has not been as thorough as normal, but GPS accuracy is good enough from what I can tell. The watch was slower to lock on to the satellite than my Garmin on a sunny cloud-free day.

On my walk to the shops the GT2e tracked 7.78km/4.83miles and Garmin recorded 4.69 miles/7.54km. I can’t be sure which one is the accurate one here, I would guess Garmin, for most scenarios, this is not a problem, but if you in an event it can mean the difference between an app like Strava identifying a 5K/10k distance or not (if you could export). In this case, the Huawei has a longer distance, so the worst-case scenario is your pace is fractionally off.

On a bike ride, I had a bit of an issue, I have either forgotten to unpause the ride, or it lost GPS. So the section between 30km and 35km has been worked out as the crow flies, which then knocked 12km of my total distance. It was probably my fault, but with limited outdoors time it is hard to confirm at the moment.

Like every other wrist-based HRM I have used accuracy varies wildly. All-day tracking is accurate, and sports tracking is good enough.

The main issue you will find is irregular jumps in heart rate, my most recent treadmill run in Zwift is a good example, the first 10 mins was an incline walk, then 20 mins easy incline run. At 15 minutes 40 seconds it had my heart rate peaking at 172bpm, which is an extremely sharp increase from the 138bpm I was at 12 minutes 58 seconds.

My Zwift data exported to Strava and the heart rate was tracked with the Polar OH1, with this my heart rate was recorded as 141bpm at 15 minutes 42 seconds. On my Garmin Fenix 6 using wrist HRM that recorded 139bpm.

Then on my outdoor bike ride, there were both drops and jumps, cycling is particularly bad for this problem, and the Fenix 6 had multiple dropouts too.

I would say the GT2e is no worse than Garmin, the Fenix 6 is just as prone to random readings, this is just a fundamental flaw of tracking your heart rate on your wrist. You can reduce issues buy wearing the watch a little tighter and a little higher when working out.

Most of the time, these blips are small enough not to make a difference with calories or avg heart rate, in this example, it meant the GT2e gave an average reading of 153bpm vs 148bpm of the other two devices.

Gauging the accuracy of the stress tracking is harder, Garmin says I am not stressed at all, Huawei thinks I have medium stress most days. I would say Huawei is probably closer to the truth.

Huawei do sleep tracking very well, being far more accurate than any other device I have used and providing superior insight. It embarrasses my £500+ Garmin Fenix 6 Pro which rarely gets my sleep times accurate.

There are only a handful of watches on the market that handle offline music, this includes Garmin Vivoactive and Forerunner music models, recent Fenix watches, the Apple Watch, and some Samsung Galaxy watches. There are probably others, but certainly not many around this price point.

The downside is you need to use old fashioned downloaded MP3s or Huawei’s music service. No other streaming service is compatible.

When I checked out the Huawei Music app, I was surprised to find a large amount of music in there. Apparently, they have 50 million tracks and 1.2 million. You can get a 3-month free trial which is much longer than the likes of Spotify, however, after than it is 9.99-Euros/PCM or equivalent price.

That is cheaper than both Spotify and Tidal, but without the smart speaker and 3rd party support, Spotify offers, I would regard this as a bit too expensive for most people.

Just like the Huawei Watch GT2, almost nothing on the market will compete with this. I switched the always-on display on and this does have a massive impact on performance, but I am still looking at a weeks’ worth of use. That is with over 1 hour of fitness tracking per day.

Depending on which GT2 you choose, you can currently buy it for as low as £159, matching the GT2e price. 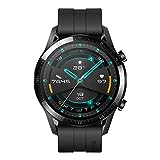 However, if you buy the Huawei GT2e before 23:59 on 14 April 2020 you will also quality for a Huawei Smart Scale which sells for around £35 and has excellent reviews.

As for competition, there is:

Huawei Band 3 Pro £39.99 – spectacular value for money, probably the cheapest GPS equipped tracker on the market offering most of the features the Watch GT series has. Perfect for people getting into fitness. 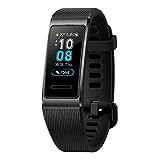 Amazfit GTR – £119 to £159 – Quite similar to the Huawei, this is a feature watch, there are a lot of complaints about GPS accuracy which ruins it a little for sports tracking. However, it can export to Strava

Garmin Vivoactive 3 – £146.48 – If you are a runner and want Strava support and/or better ways to view and analyse your fitness data, this is your best bet at this price.

For all intents and purposes, this is the same as the excellent Huawei Watch GT2, it is not as good looking, but this allows you to save a good chunk of money. If you like the aesthetics of this, then this is the more logical choice.

Fitness tracking continues to be excellent with sleep tracking superior to any other solution I have tried. This is all let down by a lack of Strava support, though. People casually into fitness may not care, but Huawei is shooting themselves in the foot by omitting a significant number of potential buyers here.

Battery life continues to be class-leading, and this will always be the main reason to opt for one of these feature watches over more functional smartwatches. In my opinion, having to charge a watch every day is unbearable, even charging my Garmin every four days or so is bad enough.

Overall, this is a superb watch, and if you are educated one what it does and doesn’t do prior to purchase I can’t see any reason why you would be disappointed with it.

If Huawei finally decides to pull their finger out and add third party support, the GT series could genuinely be one of the best multi-sports/running watches on the market.