While audio live-streaming is having its moment, Instagram is still catching up on the last big live-streaming trend, with Instagram Chief Adam Mosseri revealing that that company is planning to launch multi-participant IG Live video chats within the next few weeks.

Mosseri made the announcement during an interview with Lilly Singh on her talk show ‘A Little Late‘.

As explained by Mosseri:

“We have been working on live groups – finally. […] We’re releasing the ability to go live with more than one other person, so with up to four other people, in the next couple of weeks, which we’re really excited about.”

Mosseri says ‘four other people’ here, but I suspect that was a slip of the tongue, as the available examples only show four people total, meaning three other people in a stream.

Mosseri also tells Singh that this is an exclusive announcement on her show – but it’s not exactly new.

Instagram actually began testing this functionality in India back in December – with interest in live-streaming on the rise in the Indian market, and Instagram looking to capitalize on the ban on TikTok in the region, it launched a new trial of multi-participant live-streams to boost user interest. 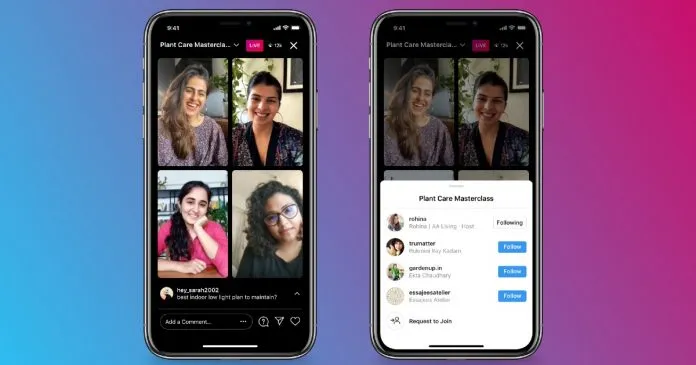 According to mysmartprice, Instagram Live views grew by over 60% in India throughout 2020, and the addition of multi-person streams provides another means to maximize that interest.

More than that, Instagram’s actually been working on the option for almost a year, with Mosseri noting in a Q and A session last March that they were looking to enable more guests in Live broadcasts:

“Right now you can only go live with one other person at a time, we’re looking into if we could expand that, but it’s not clear that that is the most pressing thing that we can add to Live, versus just getting stability up, adding more features, making it available on web, etcetera.”

So it’s actually been a long time coming, and has been in development since before the pandemic. Live-streaming, in general, saw a big rise in 2020, as people sought ways to stay connected amid the various lockdowns and mitigation measures, so no doubt Instagram would have liked to have got the feature out even sooner. But now, it looks set to be launched very soon, providing another means to broadcast, and connect with your Instagram audience.

That could open up a range of possibilities and options. You could conduct interviews, invite fans and customers onto streams, share the stage with influencers, etc. Going live with another person can also feel less intimidating – and as shown by the rise in audio live-stream platforms, people are clearly interested in more authentic, in-the-moment connection at this time.

There’s no definitive date outlined for the launch as yet, but expect an official announcement from IG some time soon.