Netatmo is an unusual company in the world of tech; they don’t seem to have a big yearly launch cycle introducing dozens of new products with refreshes of old. For example, I am now on the Ring Video Doorbell 4. Instead, they seem regularly roll out upgrades for existing hardware.

The latest upgrade is for their Doorbell with the introduction of more AI voice assistants. It is perhaps something that should have been there since launch, but it is still good they are committed to regularly updating their existing hardware with firmware updates.

The Smart Video Doorbell has been compatible with Apple HomeKit since its launch. Now, thanks to a software update, users will also benefit from Amazon Alexa and Google Assistant compatibility. This free automatic update will be deployed gradually over the next few days to all Smart Video Doorbells, including those already purchased. 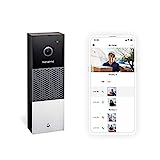 With Amazon Alexa, the user can easily keep an eye on their home

From today, the Netatmo Smart Video Doorbell will be compatible with Amazon Alexa. With a simple voice command (“Alexa, show me the Doorbell”), the user can see what is happening outside their home in real time on their Echo Spot or Echo Show.

When someone rings the Doorbell, Alexa notifies the user, who can then talk to their visitor through their smart speaker[1]. The user can use voice commands if they want to start a conversation with their visitor (“Alexa, answer the Doorbell”).

Google Assistant, for checking quickly who is at the door

The user can now connect their Netatmo Smart Video Doorbell to their Google Assistant, which will alert them through the smart speaker (Google Nest Hub, Google Nest Mini, etc.) when someone rings the Doorbell.

This compatibility also allows the user to stream live video from the Doorbell to a Google Nest Hub or Google Nest Hub Max. With a simple voice command (“Hey Google, show me the Doorbell”), they can see what is happening outside their home in real time.

The Smart Video Doorbell has been compatible with Apple HomeKit since its launch. This means the user can create custom scenes to connect their Doorbell to other smart home devices, according to different combinations. For example, when the Smart Video Doorbell detects a person, the home’s outdoor lights can switch on automatically to deter any potential burglars.

With HomeKit, the user can use voice commands to access live footage captured by their Smart Video Doorbell. They can ask Siri to show them their front door to find out what is happening at home (“Hey Siri, show me the Doorbell”).

The Netatmo Smart Video Doorbell is available for £299.99 on www.netatmo.com, on Amazon and at Apple, Maplin, Currys PC World, Appliance, etc.