New Report Looks at the Rising Influence of Online Communities

Throughout the pandemic, digital connectivity has played an increasingly important role in how we stay connected, which, for many, has exacerbated their reliance on online groups, with Facebook groups, in particular, seeing a significant rise in engagement.

But how significant are Facebook groups to overall activity, and what role do they really play in our day-to-day interactions? To provide more context on this, Facebook recently worked with researchers from The Governance Lab at NYU to provide new insights into the importance of online communities.

The research was conducted via interviews with 50 leaders of Facebook Groups in 17 countries, along with 26 global experts in online community building. The researchers were also given access to internal Facebook insights, and ran a parallel YouGov survey of 15,000 Internet users in 15 countries.

That’s a broad scope of responses – so what does the research show?

First off, the data suggests that online groups are now increasingly important to connection.

That’s a significant finding, while overall, 77% of respondents indicated that the most important group they’re a part of now operates online. 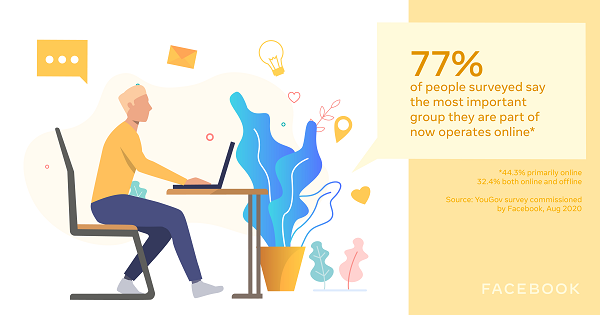 The findings underline the growing relevance of online groups, which enable people to stay connected at all times, and on a broad range of topics.

Digging deeper, the researchers were able to establish four key elements in the growth and resonance of online groups.

That’s both a blessing and a curse – having the capacity to connect with far more like-minded and like-interested people can open your world to a range of new opportunities. But that has also lead to the facilitation of hate groups and dangerous movements, with people also able to connect with others who share certain ideologies. Facebook is working to address this element, but used well, the capacity to connect around shared interests is now greater than ever before.

Another key benefit of being able to connect with like-minded people is that it enables isolated users to feel less alone, and to establish connections with those with similar experiences. This can lead to strong bonds, which increases the importance of those connections.

3. Online and offline spaces complement each other

The researchers also found common linkage between online communities and real-life connection, which can be another key benefit to establishing digital groupings. By first establishing friendships online, that lends itself to real world meet-ups, which can be key for mental health and community.

4. The COVID-19 pandemic has put many online groups center stage

And of course, the pandemic has played a role in growing online connections, as people haven’t been able to get out in real life and meet with friends and family as they normally would. That’s increased reliance on Facebook groups for social engagement, which is an important role in community building.

The findings are not ground-breaking, in the sense that many of these trends are likely as you would expect. But they do further underline the importance of Facebook groups, and the power they can have in building relevant connections and communities. Which, for brands, can be an important consideration in how you use groups to build connection with your audience, or how you utilize groups within any outreach strategy. Brand usage is not the key focus of this report, but the findings have implications for anybody looking to use groups within their strategies.

Facebook groups are used by over 1.8 billion people every month, with more than half of all the people using Facebook now members of five or more groups. There are also 70 million people leading these groups as admins and moderators, and the report lays out key lessons and learnings for those looking to become community leaders, and how to provide more support for these users.

There’s a heap of interesting insights for group admins and creators. You can download the full report here.