OnePlus 8 vs Realme X50 Pro vs Xiaomi Mi 10 Compared – Which is the best affordable flagship?

With the launch of the OnePlus 8 series we now have another great affordable option for a flagship phone this year.

While there are quite a few phones officially launched that are affordable very few have been announced for the UK yet.

I have included the Xiaomi Mi 10 in this comparison because it has some availability and is due in the UK soon. It is not quite what I would class as affordable.

The Black Shark 3 is set to launch very soon, but no confirmation on price or exactly when. I am going to guess it will cost around £599 and is well worth considering when launching.

The Redmi K30 Pro is an obvious choice but there is no word on EU or UK availability nor price.

I believe the Red Magic 5G will be getting a global rollout soon, which also looks superb, but again, no pricing or exact availability

Technically the new OnePlus 8 is the only option with a solid release date, you can pre-order it now from OnePlus for £599 with an expected shipping time of 6 days. This is for the 8GB/128GB version. 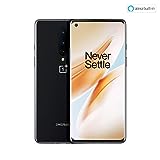 The Xiaomi Mi 10 will be available on the 22nd of April from Amazon Spain and hopefully the UK. It is listed as 799-euros which works out as £695.73 so much more expensive than the other two. Currently, it comes with True Wireless Earphone 2 headphones and also a Xiaomi Mi band 3 making it a little more appealing in comparison.

All the phones have the superb Qualcomm Snapdragon 865 chipset, I have done some benchmarks of this on the Realme X50 Pro and it is an absolute beast of a chipset.

They all also have the same base specification of 8GB/128GB all of which using the super fast UFS 3.0 storage. None of them have microSD expansion.

The OnePlus 8 and Xiaomi have very similar displays both with a sleek curved AMOLED display reducing the side bezels to nothing.

The Realme X50 Pro doesn’t look anywhere near as nice, a sacrifice you make for its affordability. The display is flat with large, by todays standards, bezels. The display is 6.44 inches running at 2400×1080 90Hz and this has a dual punch hole hiding two cameras.

The OP8 has quite a poor hardware specification for its camera, but it is worth noting, they are quite good at software optimisation, so the quality of images it produces should still be excellent:

The Realme X50 Pro has the most versatile hardware config thanks to a telephoto lens:

Realme wins for the front camera using a dual sensor and the primary one has the largest sensor of the phones with the most megapixels:

The Xiaomi then has that monster 108MP sensor which is not just big on the pixels but the sensor size is much larger than the other too at 1/1.33″. However, it lacks a telephoto lens:

All the phones have a massive battery and we are getting to the point where battery life is starting to not be a major issue with phones with them all easily getting a full day.

The Realme has the smallest 4200 mAh battery but then the fastest charging speeds by far with 65W giving you a full battery in 30mins.

Finally, the Xiaomi has a monster 4780 mAh battery with 30W charging and 30W wireless.

There is no clear winner from the three phones, each appealing to different people.

The Xiaomi Mi 10 isn’t really that affordable, but it does look amazing and should have an amazing main camera.

For people wanting the best bang for their buck, the Realme X50 Pro is the clear winner, offering the best all round specification but sacrificing on the looks a little.

The OnePlus 8 will have more mainstream appeal with it being sold in the UK from many websites. With its curved display it also looks amazing too and OxygenOS is generally regarded as one of the best Android skins.