I have always had issues with allergies and chronic nose congestion, with the coronavirus outbreak, I would then be very conscious of being in public and having a blocked nose or needing to sneeze.

So I have been trying to reduce these issues. I am weening myself off nose sprays such as Sudafed that contains Xylometazoline and is highly (psychologically) addictive due to the rebound congestion you get from it when stopping using it.

To reduce this issue, I have tried to improve the overall quality of the air around me. I have reviewed, and still use, several types of air quality monitor, the most recent being Aranet4 Home, but they only inform you of poor air quality.

Air purifiers are cheap to buy and run, so I thought no harm in trying one. 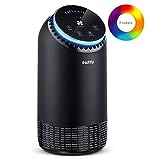 The Partu Air Purifier costs £79.99 and has a HEPA and active charcoal filter it claims to be able to filter 99.97% of bacteria, allergens, dust, pollen, smoke and pet dander.

There are three speeds with the lowest setting claiming to be 25dB.

It also features a night light with 7 colour options.

I would take these claims with a pinch of salt, the purifier will filter some but not all bacteria, and very few viruses. To be fair, there is only one image on the page that states viruses, so maybe a graphic designer got a little carried away.

Haemophilus influenzae ranges between 0.2 and 0.3um and Mycoplasma gallicepticum which range between 200 and 300 nanometers in diameter. Neither of these is a serious concern within your home.

So if we assume the carbon filter specification is accurate, the filter should be able to filter out many if not most bacterial

It is the virus claim that is questionable and considering the current global crisis is something that shouldn’t be used on their marketing material.

Most viruses range in size from 5 to 300 nanometers (nm). So on the larger end of the scale, a 300nm/0.3um virus would, in theory, get filtered out by the carbon filter which is capable of 200nm/0.3um

No chance of filtering Coronavirus

There are no claims of this made, but it is worth making it absolutely clear. Currently, it is believed that COVID-19 us around 0.08 to 0.14um so comfortably below what a carbon filter is capable of filtering out

The is not much to do to set up. However, the filter that is inside the purifier is wrapped in plastic, so you will need to open it up to remove this before you use it.

After that, you just set it to the speed you want and if you want the light on. After a few months you will get a notification to change the filter.

I have mainly used this in my bedroom to try and improve air quality when I sleep. The brand claims 25dB at its lowest setting; subjectively I am not sure if that is accurate, it is definitely more audible than I would like. It is not bad though, but if you are a very light sleeper that gets annoyed at sounds easily, you may not find it quiet enough. I doubt there is a better solution, though.

So far it does seem to have helped a little, my congestion has not flared up as much when I read at night, nor has my sneezing.

My allergies and congestion issues do seem to have reduced, especially at night when I use the purifier in the bedroom. However, with a lot of devices like this, it is hard to tell if it is a placebo effect, or possibly one of the thousands of other variables that can trigger things like allergies.

However, it is cheap enough to buy and a none drug-based approach of trying to deal with breathing problems which is always a good idea.