Pinterest Posts Significant Increase in Users in Q2, While Revenue is Impacted by COVID-19

Pinterest has crossed the 400 million user threshold, as it continues to see more usage during the COVID-19 pandemic, while the platform has also posted a 4% increase in revenue in Q2, as per the company’s latest performance update.

First off, on users, Pinterest added 49 million more users in the period, taking up to 416 million MAU.

Given the lockdowns, and people seeking for ways to stay connected and entertained, and to shop for products online, that growth is not a major surprise, but it is worth noting that Pinterest’s 39% year-over-year growth rate is better than the same at Facebook, Snapchat and Twitter (though Twitter was relatively close at 34%).

It’s also a significant improvement on Q1, where Pinterest posted a flat result in growth momentum. In this sense, the jump to 39% growth is significant, and definitely more in line with market expectations for the platform.

“People needed Pinterest in Q2. They needed a service that helped them adjust to radically changed circumstances – one that inspired them to cook at home, build vegetable gardens, plan activities for their kids and set up remote offices and home gyms, to name just a few typical COVID-19-related use cases we saw during the quarter.”

Pinterest has previously noted these trends, and clearly, there’s a growing use case for the platform – and with eCommerce sales rising fast due to the lockdowns, the platform definitely stands to benefit. The broader trend will see eCommerce adoption, which has been on the rise over the last decade, see a much sharper increase, as consumers realize the convenience and benefits of ordering online, as opposed to heading to physical stores.

Within this, Pinterest serves as a kind of virtual mall, and with the platform also adding in more direct purchasing options, including improved processes to help businesses plug their product catalogs into their Pinterest presence, it stands to reason that its usage will continue to rise.

That streamlined connection process, which Pinterest launched in May, has actually had a major impact:

Businesses are looking for ways to merge their operations online, in order to keep running during the shutdowns, and Pinterest is where shoppers are looking. There’s plenty of reason to see potential in the steady rising app.

In terms of revenue, Pinterest saw a 4% increase year-over-year, which has been impacted by reduced advertiser demand due to the pandemic. 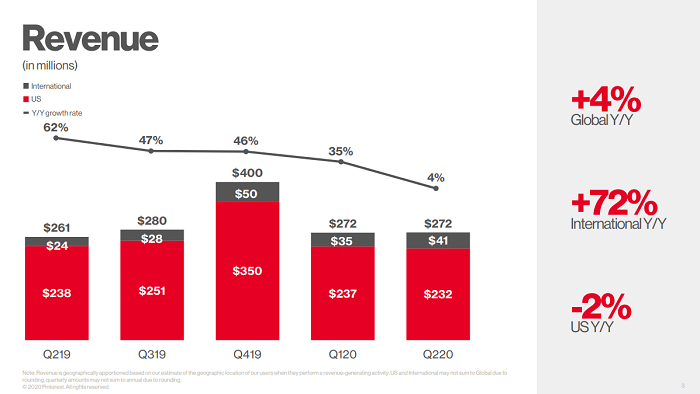 It’s difficult to take too much from the current results in this respect, as it’s not clear what impact the current trends will have in the long term, but again, market analysts seemed buoyed by Pinterest’s overall growth, and the potential in eCommerce more broadly.

Where Pinterest could realize significant opportunity is in markets outside the US, where it’s still working on its monetization options. 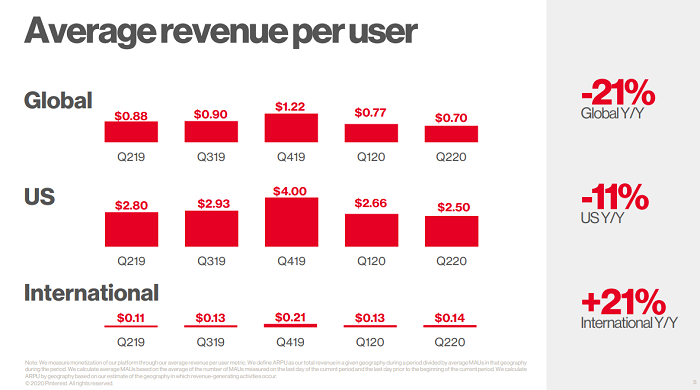 As you can see here, Pinterest is still in the early stages of the expansion of its ad tools in international markets, and its ARPU numbers are significantly lower in these regions. If Pinterest is able to maximize similar potential in all markets, it could see significant growth – though Pinterest has also flagged ongoing uncertainty around COVID-19 as being a limitation on such for the time being.

“Our total costs and expenses declined 74% year over year as Q219 included a significant catch-up SBC expense in conjunction with our IPO.”

In its accompanying notes, Pinterest says that it’s seen a significant number of people returning to the platform, while younger users have also taken an interest:

“In the U.S., we saw particular strength coming from resurrected users (many who returned to Pinterest after a lapse of several years) as well as from users under age 25, who grew twice as fast as users 25 and over. Q2 MAU growth exceeded the typical seasonal trend, driven by the unique circumstances surrounding COVID-19. Accordingly, we expect slower MAU growth going forward, both on a year-over-year and sequential basis.”

Yet, even now, Pinterest is seeing some COVID-19 usage trends hold as regions start to shift back to a level of normal life after the initial, strict lockdowns.

Pinterest has also highlighted its ongoing efforts to provide community assistance, where possible, during COVID-19, and pointed to its efforts to improve its internal culture stemming from the recent #BlackLivesMatter protests.

Last month, two former Pinterest employees spoke out about systemic racism within the company’s culture, which has prompted a re-think in its approach.

“We’re taking a number of new steps to build a truly inclusive and diverse culture and to reflect those values in our product. These measures include improving the representation of content we show Pinners, revamping our unconscious bias training and working to improve representation in our workforce, especially for senior positions.”

Overall, the numbers and focus areas look to keep the platform on a path to growth, and it’s ongoing usage increases should definitely be of interest to any business looking to sell online.

There’s opportunity in Pins, and it’s likely worth a look.