Like every social platform, Reddit has been watching the rise of audio social closely, with a view to how it might adapt the same for its own purposes. And today, the platform has shared a first look at its coming audio tool ‘Reddit Talk‘, which is essentially Clubhouse within subreddits, providing another way for users to connect within the app.

As you can see here, Reddit Talk has a very Clubhouse-like feel, with larger avatars for speakers at the top of the room, then listeners below that.

“Currently, you can use text threads, images, videos, chats, and live streams to have conversations and hang out with people in your communities. While these are great mediums, there are other times where having a live audio talk may be more useful or, frankly, more fun. So we want to partner with you to explore a new way for community members to communicate with each other.”

Reddit’s currently testing the option, with only moderators initially able to start an audio chat within their subreddits. But eventually, the view is that it will provide more ways for all members to spark audio conversations and connect, while all Reddit users are also able join a room, listen in, and react with emojis.

Listeners can also raise their hand for the host to invite them to speak. 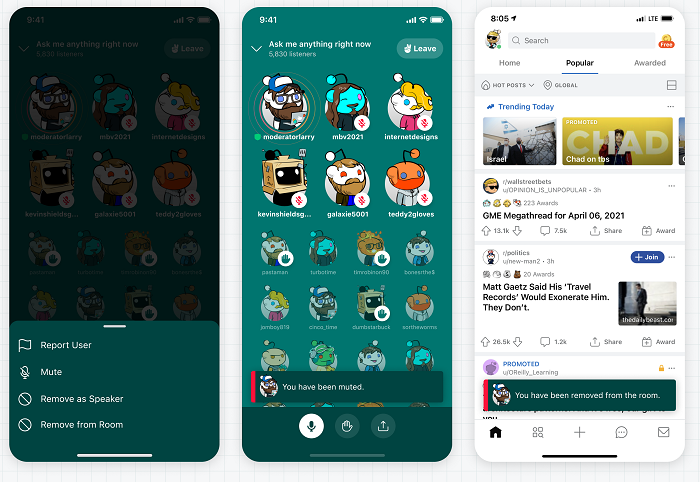 So, yes, it’s another Clubhouse clone – but as with Facebook, which is looking to bring its audio options to Groups first, as a means to enhance connection in dedicated communities, audio rooms may actually fit better within Reddit as well, given that it already hosts a broad range of highly engaged communities, focused on specific topics.

Reddit’s been working on various tools to boost real-time engagement and interaction over the past few years, with the addition of tools like live-streaming, and in-app messaging to better connect users with similar interests.

Reddit’s even tried out random group discussions, which take a somewhat similar approach to audio social. Last April, Reddit added a new ‘Start Chatting’ prompt within selected subreddits, which, when tapped, launched an enclosed group discussion of up to five members at a time from that same community.

Audio social rooms would seemingly be a perfect avenue for the same, providing a means for Redditors to enhance their community connection and engagement by dropping into real-time chats around their favorite topics, and among Redditors whom they already know and follow in the app.

As such, it seems like a solid complement to the Reddit experience – which could also see more users stick to the communities they know within the app, rather than shuffling off to newer audio groups experiences.

That’s likely not great news for Clubhouse, which is still working to establish itself amid rising competition, but the logic is clear. In fact, it’s kind of surprising its taken this long for these apps to cotton on to the potential of audio connection in this way, given the rise of options like video live-streaming, messaging and groups.

Reddit says that it’s also testing ways for hosts to customize the look and feel of Reddit Talk “through emojis and background colors”.

“Redditors can change their avatar’s appearance to fit the talk as well. We’re also exploring features to support AMAs and other types of conversations.”

Again, it could be a great fit for Reddit, and it makes a lot of sense for the platform to be jumping on board the audio social train, and the additional connection opportunities it can afford.