Smart home surveillance and smart doorbells have boomed in the past few years with dozens of options available on Amazon.

However, if you are looking for a battery-powered doorbell, there are surprisingly few options from big brand names. There are not even that many options, including wired doorbells, which I find odd because I find a smart doorbell one of the simplest home security and smart home upgrades.

I have recently upgraded my Ring Doorbell 2 to the new Ring Doorbell 3 Plus to see how the two compare and if it is worth the upgrade. 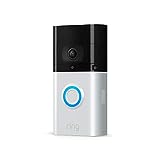 Smart Doorbell products in the UK

If you want to buy a smart doorbell right this minute from a well-known company, you have the choice of Ring or Google Nest, and the Nest is a wired option.

There are a lot of cheap random brand options though, many of which have good reviews on Amazon, some are very cheap. They will be adequate, but I doubt they will compete with the likes of Ring in terms of functionality.

It is impossible to write about Ring and not bring up the shocking publicity they have received the past year. At one point, it seems like there was a new privacy concern every week. Ring was providing customer data to companies such as Facebook and Google. They were also caught out for partnering with at least 200 law-enforcement agencies to carry out surveillance via its devices. Then there were also numerous reports that Ring had been hacked exposing user data.

Ring has addressed most of these issues, they now enforce 2-factor authentication, the company also has announced that they are temporarily pausing the use of most third-party trackers and are working on the way to allow users to limit information sharing further.

They have also rolled out new features to the app to set the status of the system to either disarm, home or away. This doesn’t particularly affect the doorbell, but if you use any of their indoor cameras, you can set it to home or disarm mode, and it will disable these cameras.

Ring has obviously not done all these changes out of the goodness of their heart, but instead to try and stem the torrent of bad publicity they received. So for many people, this will be too little too late.

For me, I find it a conflicting situation, which I suspect is a common issue for most consumer and privacy. I want privacy, but I am apathetic, most of the products and services that are bad for privacy are too useful and convenient for me to want to give up. Ring is not the sole company with privacy concerns, Google, Facebook, Huawei, TikTok, Amazon, and numerous others have been accused of privacy issues. So being outraged at Rings previous problems feels a little hypocritical when I use Facebook and Amazon daily.

With that out of the way, I will continue this review, not taking into account the previous bad publicity.

There is not a great deal you can do to improve the Ring Doorbell 2, but they have basically merged some of the features from the Ring Pro into the Doorbell 2 and called it the 3 Plus.

There are three changes I am aware of

I already had the Ring Doorbell 2, and the screw hole placements are identical even though there is a slight difference in overall dimensions between the two models. The Ring 3 comes with two mounts including the angled one, I should have used this based on my placement, but I decided to keep it facing side on so it matched the results of the old camera. I have CCTV recording 24/7, so the surveillance features of this are not super important, I mainly use it for notifications.

My previous review of the Ring Doorbell 2 praised the company for including all the accessories you need to mount it. The same is true here, it is superb. You get a good quality drill bit, plus a screwdriver and easy to follow instructions. I am terrible at DIY, and it was easy to install.

It is worth noting that the Ring 3 is not compatible with some previous accessories, this includes the angled mount (one is included in the box anyway), and the solar charger.

The new privacy mode settings do not really affect me much, it is more geared toward indoor cameras and alarms. But you can tweak the disarm, home and away modes to your liking.

So disarm by default (I think) disarms indoor recording. However, you can customise things to work as you want so you can have the away mode capture motion from the doorbell but then leave motion off when at home.

I never had an issue with motion alerts due to my placement and decent space between my front door and street, but Ring has improved the app to give you more control over alerts. This applies to both the Ring 2 and 3, but the 3 gets more advanced modes, slightly.

From what I can tell, the new advanced mode gives you 4 zones vs 3 while also giving you a preview of where the zones are based on a live image. How much this affects the performance I can’t be sure, because I have no problem with either. However, there are more settings, so it will be helpful for some people.

Both cameras now have the new smart alert feature which should only push notifications for people. Due to my placement, I don’t think I ever had an issue here either, but I am a big fan of security cameras that reduce false alerts in general.

For the actual performance of the camera and motion alerts. It works well, apart from the inclusion of the pre-roll I wouldn’t say the performance is noticeably better than the Ring Doorbell 2, they both record in 1080p and the quality of the video footage is good but not spectacular.

Pre-roll seems to work best with motion alerts. With someone walking down my garden path, it activates quite early allowing me to see them walking down most of the path. It only switches to colour as they approach nearby almost passing the camera. So without the pre-roll, it may be hard to identify what someone is doing. The pre-roll footage itself is poor, but it is better than nothing.

One of the stands out features of Ring 3 is the additional 5Ghz channel. The Ring Doorbell 2 had just 2.4Ghz, and it has been notoriously bad for signal strength, when the RSSI is high I find there is a significant delay in the doorbell ringing and the chimes going off.

I have very good Wi-Fi, with 4 access points across the house, and I separate my  2.4Ghz and 5Ghz channels. In recent months I have got the Ring Doorbell 2 down to a healthy 59 RSSI, and it has been performing well.

With the Doorbell 3 Plus on 5Ghz, I am back down to a poor 80 RSSI. 5Ghz does have less range, so this could be to blame, however, I have an access point in the front room which is adjacent to the front door.

However, with a high RSSI, I don’t appear to experience any delays in notifications. Running the two doorbells side by side, the Ring 2 with its 59 RSSI is about as responsive with notification as the Ring 3 with 80 RSSI.

If you have your Wi-Fi set to one SSID coexisting on two channels, it should choose whichever is best for the signal.

With my placement, I have always got good battery life from the Doorbell 2. The door is a decent distance from the street, and there is a 5ft fence up, hiding any passers-by. With the motion detection being horizontal and not covering the ground motion alerts are pretty much 100% accurate for humans. This means me typically charging the battery every few months.

I have not had the Ring 3 that long, but in 5 days it has dropped 10%, and I have had a few more motion alerts than usual as I have had builders working in the garden.

The battery of the Ring has a microUSB port, so you charge then and not the camera, you, therefore, an buy a spare battery and swap them over to charge. It is an additional expense, but for the sale of £20 I think it is worth it. The existing Ring 2 batteries work on this.

The Ring Doorbell 3 Plus is an incremental upgrade from the Ring 2 making a superb battery-powered doorbell even better.

With the Ring 3 Plus introducing pre-roll from the Ring Pro, I would also argue that there is no point in buying the Pro at the moment either because the Plus can be both wired or battery-powered, giving you more flexibility and a lower price. Though it does have a smaller footprint, in particular being less wide.

The Ring Doorbell 3 Plus does still suffer from poor RSSI regardless of being on 5Ghz or 2.4Ghz. Subjectively, I have found it more responsive with a poor RSSI on 5Ghz vs poor on 2.4Ghz.

Privacy concerns aside, if you want a smart doorbell and it needs to be battery powered I am not aware of anything that can compete with Ring, with the Ring 3 Plus sitting nicely at the top of their product lineup.