“To honor the diversity of APIDA experiences, we teamed up with a number of APIDA creatives including Jiqai Wang, Badal Patel and Rachel Newman to develop a series of “I Am APIDA” Lenses to uplift Snapchatters and encourage them to express themselves and their identities. We’re also releasing additional Lenses, Filters and the APIDA Pride Sticker Pack to allow Snapchatters to celebrate their heritage within the many countries, languages and cultures that make up the APIDA community.”

Asian and Pacific Islander Heritage Month is now well underway, and Snapchat is looking to provide more ways for its users to share their support – which is especially important this year given the rise in race-based violence occurring against Asian communities in various regions.

Indeed, Snapchat also recently shared some new research into how its users are planning to mark the event, and their expectations around how brands look to show their support for the API community. 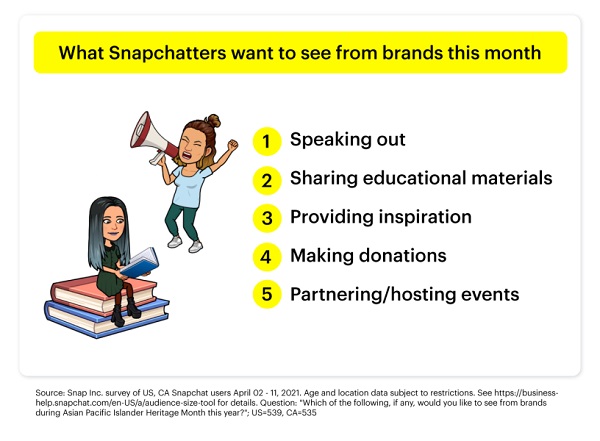 Snapchat is keen to put more focus on this element, with a view to facilitating more community support and understanding.

That will also include the launch of a new Snap Original Series entitled “As I Am”:

“…a first person series about Asian-Americans, meant to challenge and break down stereotypes, address ongoing discrimination, hate crimes and terrorism, while also shedding light on and celebrating the diverse array of experiences Asian-American people have today.”

This is an important consideration for everyone, in showing support for our broader community, and solidarity with API people who may be targeted due to misguided angst. It may not seem like a major thing – adding a sticker or using a Lens in support – but it could be just what somebody you know needs to see in order to feel that they have that connection.

It’s worth considering, and showing support where you can.

You can add these new Lenses by scanning these Snapcodes: