Super Bowl LV is fast approaching, and that also means that a whole raft of brands will be looking to link into the surrounding conversation on social, in the hopes of capturing their own ‘Dunk in the Dark’ viral moment of branding glory during the event.

Indeed, that tweet from Oreo back in 2013, which has been studied and scrutinized within an inch of its life, seemingly awakened businesses to the power of trendjacking during the Super Bowl, giving Oreo the equivalent exposure of millions in relative ad spend via a simple, real-time response tweet.

Since then, more and more brands have been trying to find their own way into the Super Bowl discussion – which is why data reports like this one from Snapchat, are hugely valuable to those assessing the best way to connect, and maximize their exposure during the event.

And while Twitter is often viewed as the real-time event powerhouse, Snapchat may well be worth considering – according to Snap, 61% of its users will be tuning in to the 2021 Super Bowl next week.

But more than that, Snapchat users are also increasingly engaged with the Super Bowl ads and promotions.

“Snapchatters’ reaction to Super Bowl commercials is what usually spurs spontaneous sharing on Snapchat. In 2020, there were notable spikes in conversation for advertisers like Google and Pringles when their commercials aired.”

The Super Bowl commercials, of course, have taken on a life of their own, and as you can see here, Snapchat users, in particular, are increasingly engaged with this element, which could be worth considering in your efforts.

Getting this right could have significant benefits, with Snapchatters getting enjoyment out of creative, engaging promotions during the event.

In fact, a clever, real-time linkage to the halftime show could be particularly powerful, based on Snapchat’s engagement insights. 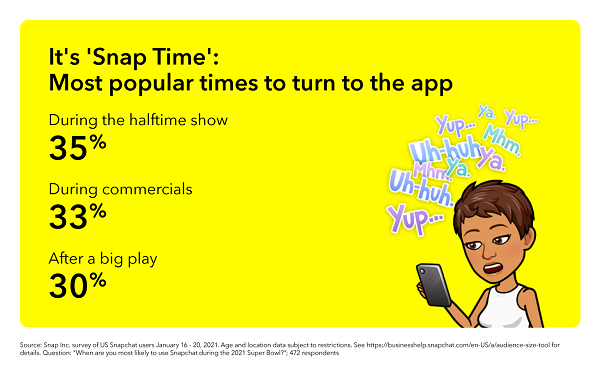 So while the game itself will be the focus of sports fans, it’s worth considering the rest of the audience, and how they’re looking to interact around the event. As this data shows, people are seeking opportunities to connect around each element as it happens – which, given the ongoing pandemic limitations, could be even more powerful and resonant this year.

Worth considering in your approach to the game, and your tie-in campaigns.