Snapchat has announced a new set of ad options for app marketers, which look to expand on the opportunities for app developers to connect with Snap’s audience by cross-linking their app functions with the platform.

The main connection here comes via Snap’s Creative Kit, which enables developers to integrate Snapchat functionality into their apps, and Login Kit, which allows users to sign into your app with their Snapchat credentials. Both are part of the broader Snap Kit platform that Snap announced back in 2018.

The idea is that by allowing more cross-connection between apps, Snap facilitate more connection to its engaged, young audience, while linking into other apps will also open up its platform to outside contributions, which could help it build a larger eco-system to better compete with Facebook and other social apps. Snapchat also announced Snap Minis earlier this year, which enable creators to create mini versions of their apps within Snapchat.

Today’s additions are focused on promotion – for example, through Creative Kit, app marketers can connect their app data into Dynamic Lenses, which provide a means to display app info within AR promotions.

As you can see in this example promotion for Yahoo Fantasy Sports, the AR promotion displays the actual game data within Snapchat. This is one of the new options facilitated by Snap’s improved cross-app connection.

Snap’s added a range of new objectives tied into these tools, including:

Optimization for installs from Lenses

Snapchat says that app marketers focused on user acquisition are now able to select app installs as the objective for AR Lens campaigns.

“App Advertisers focused on user acquisition can ptimize their Lens campaigns towards installs as their primary KPI. Similar to Snap Ads, simply set a desired cost-per-install bid, and our system will work to achieve that outcome.”

Advertisers will be able to set a desired cost-per-install bid, like regular Snap ads, and the system will work towards that outcome.

The new App Conversions ad objective provides an improved deep-linking process which is designed to elicit more engagement in apps. 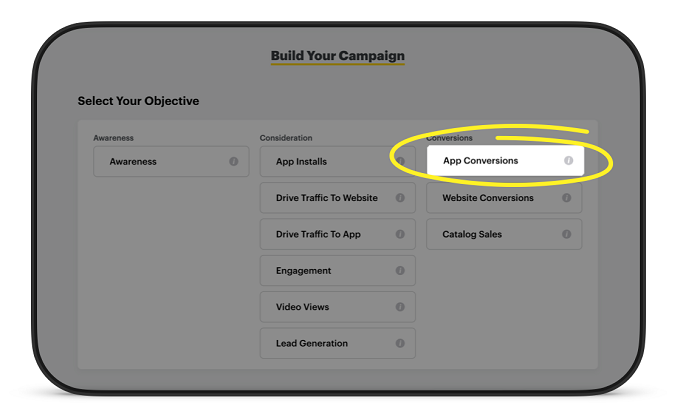 “In this dedicated campaign flow, you’ll find an improved deep link ad format to elicit more engagement, the ability to create custom audiences based on the different actions they take in-app, and new goal-based bidding options so you can optimize towards repeat actions, such as Opens and Purchases (and is supported by MMPs).”

“Browsing and buying on mobile is second nature to our audience, and now you have more ways to control your desired profitability.”

“Developers who’d like to monetize their app can integrate our Ad Kit SDK to add the Snap Audience Network as a new monetization option.”

The Snap Audience Network is still in beta, but it will eventually provide more options for cross-promotion through apps.

There are some interesting options here for app developers, and with Snapchat reaching some 90% of all 13 to 24-year-olds in the US, you can imagine that these app promotion tools will prove popular, and could provide interesting, engaging ways to connect with younger audiences.

And as noted, that could help to make Snapchat a more critical tool for discovery and connection, facilitating a cross-app eco-system that keeps users in tune with the latest app trends.

In other Snap News, it’s running its ‘Lens Fest’ AR showcase next month.

Join top professionals from around the world to learn about Snap’s growing AR ecosystem and how we’re building the foundation of the AR Economy. Let’s pioneer the future of AR together.

The event will provide more insight into the future of AR on the platform.