Snapchat has posted its latest performance update, showing solid increases in both usage and revenue throughout Q1 2021.

The numbers will certainly raise some eyebrows, and likely get more social media marketers considering their options on the app.

First off, on usage – Snapchat is now being used by 280 million people every day, a 22% increase in year-over-year performance, and the app’s biggest increase in its YoY usage growth in more than 3 years

As you can see here, while Snapchat usage increased in all regions, the app once again saw its biggest growth in the ‘Rest of World’ segment, which is largely due to the company’s ongoing investment in more localized content and improved language support options.

Snap has seen particularly strong growth in India of late, with its Android update, rolled out back in 2019, playing a key role in boosting Indian user uptake (Android is the most popular OS, by far, in the Indian market). Indeed, Snapchat reports that for the first time in Q1, the majority of its DAUs were on the Android version of the app. That’s a big switch for a company that long resisted Android, and focused more on aligning with the technical superiority of iOS devices.

Snapchat also launched its first Snap Original for the Indian market in the quarter, with a local version of ‘Phone Swap’.

Snapchat now has over 60 million users in the Indian market, closing in on its biggest usage sectors.

Snapchat’s also seeing increased engagement with its AR tools, with the number of Snapchatters engaging with its AR Lenses daily growing more than 40% year-over-year. That looks set to become an increasingly important focus for the app, with reports that Snap is also working on a new, fully AR-enabled version of its Spectacles device.

Snap has also highlighted the growth of its TikTok clone ‘Spotlight‘, which, in addition to being a feed of short video clips, also provides cash incentives – up to $1 million per day – for the best, most engaging Spotlight shorts.

Several creators have made big money from the option, and that’s likely helped to improve overall take-up of the option.

“In March, over 125 million Snapchatters used Spotlight, our newest platform surfacing the most entertaining Snaps from our community. We also launched Spotlight in three new countries – India, Mexico, and Brazil – making it live in a total of 14 countries.”

That’s significant within the scope of Snapchat’s overall usage growth numbers, but the question looming is how sustainable that process will be. Can Snap simply keeping paying out millions of dollars to keep the good content coming, and keep users coming back to Spotlight for more?

Definitely, there are some concerns within that, as reflected in Snap’s ‘Cost of Revenue’ chart. 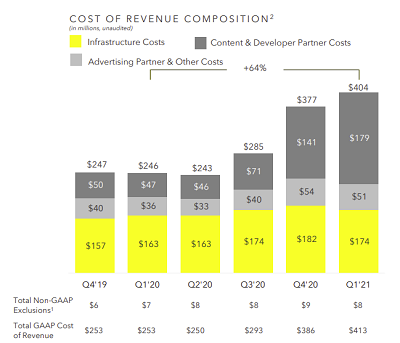 As you can see, the company’s ‘Content and Developer Partner Costs’ have seen a big increase over the last two quarters, more than doubling on Q3 2020. That figure incorporates its Spotlight payouts ($90 million) as well as its ongoing AR development, and this will be a key element to monitor in future, as to how Snap can maintain its momentum in line with costs.

But at the same time, revenue is also climbing. Snapchat posted a 66% year-on-year revenue increase for the quarter, rising to $770 million. 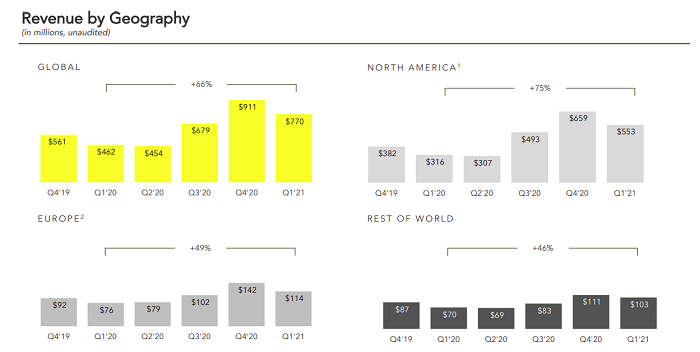 So Snap’s cost of revenue may have increased by $158 million year-over-year, but its overall revenue intake increased by $308 million within the same period. Maybe the math works out, and Snap can sustain those Spotlight costs, as it’s usage benefits would be helping to drive increased advertiser interest.

In its accompanying notes, Snap has also highlighted its rising eCommerce opportunities, with increased investment in AR try-on tools, digital clothing for avatars and advanced opportunities via its evolving full-body scan AR tech.

Snap also says that over 75 million Snapchatters watched beauty-related content each month on Discover in Q1, which could point to further marketing opportunities on the platform that play into its advanced AR features. Snap launched a new AR try on experience with Estee Lauder earlier in the week.

“We believe that our leadership in both AR capabilities and user engagement positions us well to expand augmented reality to new use cases and behaviors. For example, as the shift to online shopping continues to accelerate, we believe there is a massive untapped opportunity for AR-driven product innovation in eCommerce – and that our young audience will continue to be early adopters of these new technologies and shopping experiences.”

Another area of ongoing concern for Snap is the impact of Apple’s IDFA update, which we now know is being rolled out next week. Reports have suggested that both Snapchat and Facebook will be most significantly impacted by the change – but Snap’s Chief Business Officer Jeremi Gorman says that both Snap and its ad partners are prepared.

“We are supportive of Apple’s approach because we have always believed that advertising should respect customers’ privacy. The fact that these changes are coming later than we anticipated has provided additional time to adopt Apple’s SKAdNetwork and begin implementing and testing with our partners. Advertisers that represent a majority of our direct response advertising revenue have successfully implemented SKAdnetwork for their Snap campaigns.”

Gorman further notes that Snap’s designing an array of privacy-centric solutions to ensure they can continue to deliver a privacy-first experience, and best-in-class offerings for its ad partners.

Overall, it’s a positive report for Snap, which has now established its market niche, and its presence within the wider social media sphere. It did, at one point, seem like Facebook would swallow it up, or force it out, but Snap has stuck to its guns, and remained attuned to its user community, which has enabled it to refine its offerings and maximize its potential as a connective tool.

It’s worth considering Snap’s audience, and how it might fit into your strategy.