I love video doorbells; they are one of my favourite pieces of smart tech. However, they can be quite expensive; the latest Ring Video Doorbell 4 and the Arlo Essential Wireless Video Doorbell are both £179.

The SpotCam Video Doorbell 2 comes in at a much more wallet-friendly £89 with the added bonus of including a chime speaker and free 7-day cloud recording. Ring will charge you £19.99 for a chime and Arlo £44.99. So this is well under half the price of the big names while also not incurring ongoing costs (but there are some optional subscription services). 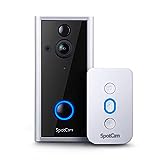 Set up was quite straightforward, similar to most IoT devices nowadays. This uses Bluetooth to simplify the process with you passing over the 2.4Ghz WiFi details.

Annoyingly, if you want to use the free 7-day cloud storage, you have to go through a subscription set-up process. Thankfully they don’t require you to provide card details, and it only takes a few seconds, but I would have thought this would be enabled as default.

Within the camera setting, you can tweak various things to your liking. There are options for HD Video. Image quality settings and night vision.

One thing I like is the ability to set up email alerts on top of the normal push alerts and chime.

You can also set up an alert schedule, so you don’t get bothered while you are sleeping.

The physical installation is better than average. You have four screw holes securing the backplate into position firmly, but they also include some 3M tape which allows you to stick it to something.

Video quality is good enough. I’d say it is similar to the performance you get from Ring. However, that costs a lot more money. Eufy and Arlo offer much better quality. Generally, I am not too fussed about amazing quality from a video doorbell, I just need to know who has been at the door and to get notifications in a timely manner, and it does this well.

The fisheye lens offers an improved verticle field of view vs Ring but not as good as the 1:1 aspect ratio that Arlo has.

Motion detection performance is sub-par. There is no way to customise things, instead SpotCam wall off any advanced functionality in an overpriced Video AI subscription service.

The specification states that it uses intelligent, active motion detection to reduce false alarms, but I definitely get more false alarms than Eufy/Ring/Arlo.

My garden is fenced off from street level, so there is very little that should be setting it off. Older IP surveillance cameras used to trigger when from swaying plants and shadows, so it is likely what is happening here.

The battery is OK, I have not had it long enough to drain from full to flat, but I am sceptical of the 6 months claim. Based on my current usage, I’d expect more like a monthly charge. Tweaking the image settings and using the video AI service could likely reduce the battery drain.

Similar to Eufy, you have to remove the entire doorbell to charge it, meaning you are without a doorbell for several hours. I much prefer the removable battery of both Ring and Arlo, so you can swap it out with a spare.

It is quite easy to remove the doorbell, too, whereas other brands lock it into place. This does make it easy to get off and charge, but there is the potential for an intruder to remove the doorbell (or steal it) easily. I wouldn’t regard it as a significant issue, but I guess it depends where you live.

So far, there doesn’t seem to be a serious issue with this camera. Loading up events or live feeds is a bit slow as if struggling with connection, but they do load, and alerts seem to come through quickly enough.

While SpotCam can be praised for offering free basic cloud recording and the option to record to microSD, they are a bit of a rip-off for the Video AI services.

For basic human detection, they will charge you $5.95 per month. The outdoor service pack which has human, vehicle and missing object detection, plus virtual fence, will cost you $9.99.

Eufy does all this for free, and Ring/Arlo do most of this as part of their subscription packs which are around £2.50 per month.

I assume the SpotCam subscription will cover all the SpotCam devices you may have, but Ring Plus is still only £8/month for unlimited devices and 30-day video history.

Even though the Video AI plans are extortionate, SpotCam has cloud recording plans which are quite affordable, with some caveats.

You can get 30 days of recording for $2.95 (£2.08) per month or $29 per year per camera, which is less than what Arlo and Ring charge for a single device (£2.50/month). However, there are no bulk options, so if you add several cameras around your home, the costs will mount up, whereas Ring caps out at £8pcm.

The SpotCam Video Doorbell 2 is £89.99 and includes a chime.

The best alternative option I have personally used would be the Eufy Security 2K Wireless Video Doorbell. It is currently priced at £179, the same as Ring and Arlo, but it regularly drops to £134. The home base works as a chime, and the overall quality and performance are well worth the extra price (at £134).

Alternatively, there is the 1080P eufy Security WiFi Video Doorbell Kit for £89.99. This comes with an include a chime. I have not used it, but knowing Eufy, it will be excellent. The only disadvantage this has over SpotCam is the lack of free 7-days cloud recording; though it offers on-device AI human detection free of charge.

Then Ring also has their Ring Video Doorbell for £89, there is no chime, and you will need to pay £2.50/month or £24.99/year to make the most out of it. Again, I have not used this one, but knowing Ring, it will be excellent.

Factoring in the price, the SpotCam Video Doorbell 2 is good. It works out quite a bit cheaper than the cheapest Ring, thanks to the included chime and free cloud recording.

The problem is that the Eufy 1080P doorbell is regularly the same price, it is very well reviewed and will have superior motion detection than the SpotCam, but it does lack cloud recording.

Ideally, I’d say the SpotCam should be £10-20 less to make it stand out from the more reputable brand names. It is still a decent enough video doorbell and well worth keeping an eye on with the regular Amazon discounts that always happen.