I have recently been featuring more multi-gig networking products on the site. Most of these are aimed at home enthusiast/SOHO users and are as affordable as possible.

The StarTech Intel X550-T2 may not quite tick those boxes being priced between £190-280 depending on stock. While this may be pricey for your average home users and their plex server, for a business wanting a dual-port 10GBASE-T card it is one of the best (few) options out there. 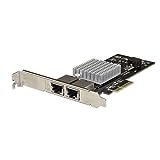 The StarTech ST10GPEXNDPI is just a 3rd party implementation of the Intel X550-T2.

This comes with both a standard and low profile bracket allowing it to fit in any chassis size. Beyond slotting it in, there is not much set up to do. Unlike the ASUS XG-C100C with its Aquantia chipset, this was recognised out of the box.

With the Aquantia based cards requiring driver installation, this will likely rule them out for many enterprise installations.

The biggest issue with testing the performance of a 10 Gigabit Ethernet Card is matching up all the hardware to handle the speeds. While I have reviewed the Xyxel 10GbE switch and 10GbE copper transceivers, I struggled to get full 10-gig speeds.

I ended up having to connect my server and PC directly with the ASUS XG-C100C and StarTech X550-T2, so the performance is capped by whichever is the slowest card.

With this system in place and transferring from a Kingston KC2500 NVMe to a Kingston Kingston DC1000M I was able to achieve the speeds you would expect. In testing, this was a touch under 9.5 Gbits/sec or around 1180MB/s.

10Gbase-t has been painfully slow to become mainstream, we are only just seeing multi-gig being implemented on consumer motherboards.

Intel has dominated the scene for years and charged typical Intel prices. This changed when Aquantia (now owned by Marvel) launched their 10GBASE-T controllers. Nearly all the cards using Aquantia are single port and generally aimed at the consumer/enthusiast market.

One exception appears to be the Qnap 10GbE PCIe Card QXG-10G2T-107 which is a dual port but has a fan for cooling.

As I have limited access to different cards and hardware set ups, it has been difficult to make a comparison of performance. However, I found two posts that show some comparisons

In this Aquantia AQTION AQC107 vs INTEL X550-T2 comparison, initially, the tester had issues getting the read speeds of Aquantia to perform anywhere near appropriately. However, by switching the MTU value to 9014 the Aquantia outperformed the Intel slightly.

In this post comparison between the Aquantia AQC-107 10Gb vs (the older) Intel X540 10Gb the tester concluded:

In terms of the Intel X550 vs X540, performance should be about the same but the new card is more efficient. Power usage is stated at up to 13W at 10GbE using dual ports with an average power of 11.2W. This drops in half down to gigabit. The X540TW uses 17.4W (typical) and 9.5W at gigabit so quite a big difference.

Current pricing of this is not good, Startech tries and sell it for almost £500 but direct from Startech on Amazon is £284. Even that is too much.

However, up until June, the price was £185 direct from Amazon.

The official Intel X550-T2 Ethernet 10 Gigabit PCI-E Network Adapter is £240 from Scan, but you can buy it for as low as £177 from third parties on Amazon. However, I am not sure if these will be genuine.

So if you specifically want the Intel X550-T2 and can Amazon stock it again for £185, then this is a good buy.

The best price I can currently find for a dual-port 10Gbase-t Ethernet Card is the 10Gtek X540-T2 for £180. Currently, the StarTech version of this costs more than the X550 model.

For home users wanting a single port, there is little need to look further than the ASUS XG-C100C for just £80. It is probably not something you want to deploy in a production server in your business, though.

Current pricing of the StarTech doesn’t make it too appealing with this being around £40 more than competing options including Intel themselves. However, if Amazon ever stocks it again, the price was £185 which is the lowest price for an X550 based card I can find and puts it £5 more than the X540-T2 based card from 10Gtek.

The X550 seems like a logical choice over the X450 with driver support lasting through to 2029, and it uses less power with a more convenient PCIe3x4 connection.

If you want a dual-port 10GBASE-T card and can find this at a reasonable price compared to the genuine Intel part, there is no reason not to get this.