I have covered quite a lot of NAS devices recently, which
are a fantastic investment for both business and home users providing network-attached
storage and a range of useful applications built-in.

TerraMaster has quickly become one of the stands out brands, offering superb value for money with better hardware specs at a lower price point than much of their competition.

Most recently they sent me a DAS enclosure to review, which is quite a bit different than the more popular NAS.

While NAS drives may be the most popular option for people
looking for an external storage solution Direct Attached Storage provides some
appealing benefits for specific types of work.

It is easy to get the two devices mixed up, if you look on
Amazon, physically they look very similar. A DAS is much more straightforward, as
the name suggests it connects directly to your PC, and in this case, it uses USB3.0
type C, but you can also get thunderbolt options. With it connecting direct
your PC, similar to how an external drive would work, there is no additional
applications built into the drive itself. So no torrents, Plex, or web access. There
is also no software needed to use the drive.

While this may not appear very appealing compared to network storage which allows multiple computers to access it all the time. It comes with some significant advantages, most affordable NAS drives are limited to gigabit ethernet, that means you are going to get a max transfer speed of around 110MB/s. USB3.0 is rated at 5Gbps, so in theory, you could transfer at about 600MB/s, though this drive is advertised as hitting 410MB/s. Similarly, the equivalent number of bays in a NAS drive costs a lot more, the 4-bay F4-210 is £239.99 while the 5-bay F5-221 is £369.99.

The main thing to take into account when setting this up is
that the drive can handle RAID 0 or 1 only on the first two drive bays. The
remaining three drives all act independently. So in theory, with a fully
populated array, you will have 4-drives showing up in your OS.

The advantage here is that you can have 1 array with a
redundant drive for your important data, then the remaining three for general
storage. Alternatively, use RAID 0 for improving speeds then run backups for
anything important you don’t want to lose.

One thing I liked about setting this up was the quick
release drives have screw holes placed so you can install a 2.5-inch disk
without buying an adaptor, which then allowed me to install an SSD.

You also get all the screws needed for installation, this
includes screws for the 2.5inch drives, and a little screw drives.

The supported file formats
for the units are FAT16, FAT32 and NTFS.

One downside is the
included USB cable, it is quite short, so it will need to be quite close to
your computer. Cables are cheap though so it is not a huge issue.

When setting up the RAID
there is not much to do, you turn a little screw to point to which RAID option
and the drive does most of the hardware itself. If you switch modes, you need
to use a pin to press the reset switch. When the new RAID array is created (on
Windows), you will need to go into disk management to initialise the disk then
format it.

This with single drives this performs as you would expect any external drive to perform.   I used the Toshiba N300 NAS drives for testing and also a Crucial MX500 SSD.

In CrytalDiskMark I was able to achieve the following Speeds:

The SSD performance has a lower write speed than expected,
but I suspect this is the cheap SSD rather than the DAS.

Fan and disk noise is negligible and less than the PC in my office, which is already quiet.

While there are dozens of NAS drives to choose from to suit
multiple budgets, the choices in the world of direct-attached storage is much
more limited.

The Terramaster D5-300 is the main competitor, this is almost the same, but it uses all the drives for RAID. However, it only allows you to use RAID 5. Meaning you lose two drives to parity/redundancy. It is currently £80 more at £259, so quite a big difference, but certainly worth considering if you want lots of storage combined with redundancy. 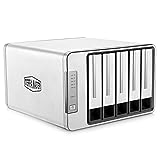 The TerraMaster D5 is perhaps the best upgrade to this. It will set you back almost £600 but offers RAID0/1/3/5/10/JBOD on all the drives, and has Thunderbolt which includes the ability to daisy chain devices. 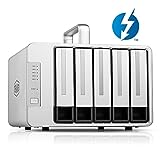 Drobo used to be a big name in this industry, they seem to
have dropped off the radar a little. The DRDR6A31 which is a 5-bay das is a pricey £763.07 though it is not really a
like for like comparison. The full array is available for their proprietory BeyondRAID
which offers up to RAID5 giving you two drives of parity. It is also Thunderbolt
and USB3.0 and has the option to have an SSD cache.

The QNAP TR-004 is an interesting hybrid device being a NAS but also offering USB3.0 direct access. This is about £250 and only 4-bays.

Yottamaster offers a 4 drive solution, one with no RAID at
all for £128.99 and the other with RAID available for the full array, with RAID
options of 0/1/3/5/10/JBOD and this costs
£188.99. Neither of these has great Amazon reviews.

Beyond that, your choice is minimal and mostly random brands. Probably the best alternative would be just a normal external drive, with Wester Digital having the My Book Duo range that goes up to 28TB using two 14TB drives and costing £569.64

The low price and plenty of bays make this quite appealing
for someone like myself that has older drives no longer in use inside a
server/NAS.

The basic RAID options do limit its appeal a little, being
able to use all the bays as JBOD would be great for re-using all them drives. However,
with this being a DAS the only other option would be to run all the drives in
RAID, so there are arguments for and against.

Overall, there is little to fault about this drive, if it
suits your particular needs. With transfer speeds hitting around 3.2gbps this offers
dramatically more performance than its network-attached counterparts, making it
much more appealing for certain scenarios.

There is also almost no competition with this feature specification and all other 5-bay DAS enclosures cost significantly more.