TerraMaster has quickly established themselves as a popular NAS brand providing an affordable alternative to the market leader Synology and outclassing many other brands in terms of features/performance/price.

In particular, for home and SOHO users, these NAS drives provide excellent value for money, and the new TerraMaster F4-422 is one of the most advanced none-enterprise options they have launched. 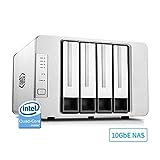 It is worth noting that this isn’t that much different from the older F4-421, you get the same CPU and RAM, but this now includes an RJ-45 10GbE jack. Nowhere in the UK appears to sell this model anymore and  TerraMaster seems to charge $10 difference, so, at this point, I would say the F4-421 is redundant now.

Having already reviewed the TerraMaster F2-210, the setup procedure was familiar and simple. The NAS comes with all the screws you need to mount either 3.5-inch drives or 2.5-inch.

With these slotted into place and the NAS booted up, you can either scan you network for the IP or download and install the TNAS PC application which will point you to the right place.

From there it is a simple guided GUI where the NAS will check the health of the disks and allow you to set up the system as you want.

On the lower-end models, for both TerraMaster and Synology, you only have the option of EXT4, but with this model, you get Btrfs. Btrfs is designed to be used across multiple drives in RAID natively as well as offering advanced features such as snapshots and rollbacks.

The OS of TerraMaster is good, it is easy to use, and I have experienced no issues with glitches. All the built-in functions have worked flawlessly for me so far.

In particular, setting up shared folders, managing users and access, as well as managing disks, volumes and storage pools all, work well. There are two USB ports, so it is also possible to expand the storage via this.

For file access, you have SMB, AFP, FTP, NFS as well as the option for a Rsync server

With three Ethernet ports, you have various bonding features including dynamic link aggregation and static, as well as self-adapting load balancing and active/standby. With my 2.5GbE switch being unmanaged I used the active/standby option.

Highlights (for me) include:

What is missing includes:

All the features I want from Synology that the TerraMaster lacks can be replicated with a little work and a small amount of technical skill.

With this supporting PHP/MYSQL you could host applications on the webserver, or alternatively use the increasingly popular Docker.

You can set up Docker via SSH, which is what I am normally used to, or the application is quite easy to use once you get used to it. Under the registry, you have all the available applications, which is extensive and includes options such as a full Ubuntu instal.

For me, the main ones were NZBGet, Sonarr, Radarr, and AdGuard for adblocking DNS. Then NextCloud is an important one which replicates most of the Synology specific applications and provides a mobile app allowing me to backup photos similar to Synology Moments.

For beginners, it is not ideal; it is not the same as installing a package, you will need to map directories and port numbers, but once you have one set up you will quickly get the hang of it.

With NextCloud set up as well as the other applications, there was very little I found missing from the TerraMaster that my Synology has. The one missing feature was the lack of a surveillance app.

While I was happy with the TerraMaster F2-210 based on its affordable price, moving to the quad-core Intel CPU of this and 4GB RAM is night and day. General performance is vastly improved, there is no laggyness with things, and for most of the things I do I rarely see the CPU get taxed at all, and there is always plenty of free RAM. Installing applications or unpacking downloaded files never too the CPU beyond 30%. Obviously, your mileage will vary dependant on usage.

With the lower-end models, I found download speeds didn’t quite match the speed of my Virgin 350 connection; this was true for both the Synology and TerraMaster. With this, it can comfortably cap out at 40MB/s which is about the same speed as my AMD Ryzen 5 2600 server can do.

For files transfers, I was limited to 2.5Gbps as this is the limit of my switch. Using an SSD for testing, I was able to achieve 299.3 MB/s and 229 MB/s for read and write within CrystalDiskMark over an SMB share.

TerraMaster claim speeds of 650MB/s and 670MB/s, respectively, and I see no reason why this would not be easily achievable with the correct RAID configuration and full use of 10GbE.

Power draw from the NAS never exceeded 50W from my testing and noise levels were very low. This was located in my server room, so noise wasn’t something I paid too much attention to.

Most of my content is in 1080P, but a lot of it is in a  high bitrate with 7.1 audio. During my time testing, I experience no issues with playback. Most of my regular use is within the LAN, so it is rare that I require any transcoding, so my testing here was limited.

While there is no denying that TerraMaster can’t compete with Synology with the OS and features of their NAS system, TerraMaster offers one massive advantage over Synology. The hardware you get for the price.

With this being priced at £439.99 the competing 4-bay Synology NAS options include:

The Synology DiskStation DS920+ is the stand out option for me, offering a superior CPU and the benefit of NVMe cache. While it doesn’t cost a huge amount more, it is still £78 making it around 18% more expensive than the TerraMaster.

It seems strange that Synology has no adopted 10GbE when they offer the speed benefits of NVMe. Currently, there are no 4-bay DiskStation that provide any form of 10GbE. You would have to move up to the DS1618+ and then use the PCIe slot to upgrade to 10GbE.

With that said, if you don’t want or need 10GbE, and want something that is feature-rich and simple to use as possible, Synology will still be your best bet, with the DiskStation DS920+ looking like an excellent choice.

If you do want 10GbE, it is slim pickings, and not much comparable at this price.

The Asustor AS4004T is the most affordable option on the market for around £380 but has a lower specced Marvell ARMADA-7020 dual-core chipset based on Arm and 2GB DDR4.

The Synology DiskStation DS1817 is the only DiskStation with 10GbE built in which costs around £900. It is an 8-bay system with dual 10GbE so quite different to the TerraMaster.

The cheapest way to get 10GbE for Synology is the DiskStation DS1618+ for around £750 then use a 3rd party 10GbE NIC to upgrade such as the Buffalo LGY-PCIE-MG-WR or QNAP QXG-10G1T.

As usual from TerraMaster, they offer superb value for money is one of the most affordable 10GbE NAS options on the market. If you only want simple NAS functions, there is little reason to go for more expensive counterparts.

The TOS software is lacking compared to the feature-rich Synology system, but I found that the features it does have work just as well as Synology. With a little work and basic technical skill, you can easily replicate many key functions via Docker.

While I wasn’t able to connect at the full 10GbE, my 2.5GbE switch allowed me to achieve speeds consistently over 250MB/s more than double what I was previously getting with gigabit connections and beyond the maximum speed of a single mechanical hard drive.

With the boom in content creators over recent years and the prevalence of 4K (or higher for some creators), the need for multi-gig has gone up exponentially. It is still painfully expensive, mainly due to the cost of switches, but these are also coming down with recent affordable options from Zyxel and QNAP. I think TerraMaster have been wise to release an affordable 10GbE, no other brand has an option with a similar spec/price point, and it allows TerraMaster to capture users in need for affordable multi-gig storage options.

Overall, this is a superb NAS perfect for enthusiast home users and SOHO setups, specifically those that deal with media and large files.