As it continues to face challenges over accusations that it exposes young users to inappropriate content, TikTok has today published its latest transparency report, which provides specific detail on all of the videos that TikTok’s team has removed, for varying reasons, over the preceding six months.

The numbers show that TikTok is working to improve its systems, and remove offending content before it reaches an audience, while they also provide more context as to the rising scope of the challenge before it in this regard.

First off, on total videos removed – as explained by TikTok:

“89,132,938 videos were removed globally in the second half of 2020 for violating our Community Guidelines or Terms of Service, which is less than 1% of all videos uploaded on TikTok.”

That suggests that TikTok saw around 9 billion total videos uploaded in the period, which is largely in line with its previous Transparency update. TikTok says that 92.4% of these videos were removed before a user reported them, and 83.3% were removed before they received any views. Both of these figures are slightly down on its previous response efforts, but it’s still an impressive effort to address and remove concerns.

And while 89 million removals sounds like a lot, it’s actually less than TikTok removed in the previous period.

Which seems strange, given the platform’s continued growth – but then again, it did lose 200 million Indian users which would have been accounted for in the last report.

On specific violations, TikTok says that the majority of clips were removed due to ‘minor safety’ (36%). 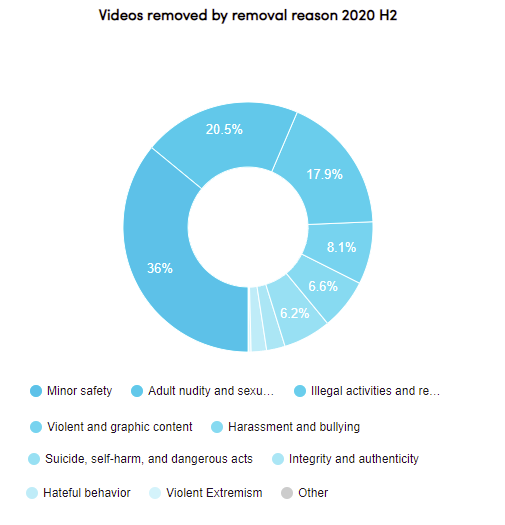 As noted, TikTok is currently under investigation by The European Commission due to concerns that it exposes young users to inappropriate content, while the app was also temporarily banned in both Italy and Pakistan within this reporting period because of related issues.

Clearly, it is making this a bigger focus of its efforts

Given the noted enforcement actions and investigations, it’s clear that TikTok needs to do more, and the relative increases noted here reflect that push.

Nudity and sexual activities were the second biggest cause for removal (20.5%).

TikTok has also shared its relative removal rates for each element, highlighting how it’s responding to each concern. 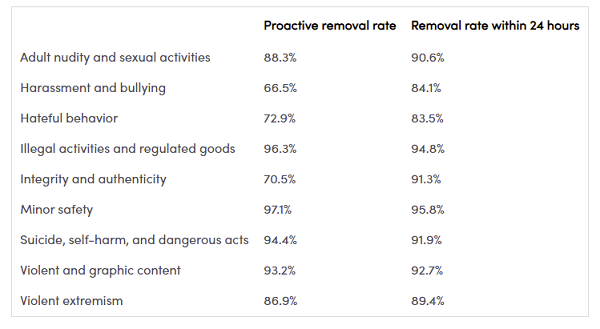 That provides some context to the scope of challenges that TikTok faces, and the areas it will be looking to prioritize for improvement.

TikTok also says that it rejected 3,501,477 ads in the period for violations of its ad policies and guidelines.

Overall, the data shows that TikTok is working to evolve its detection strategies in line with its growth, but again, various challenges remain, and there are some key elements that TikTok needs to improve on to avoid further regulatory scrutiny. Every platform has to evolve their strategies in this respect, and based on these numbers, it does seem that TikTok’s processes are evolving, and shifting more into line with community expectations.