Twitter’s head of product Kayvon Beykpour first noted the initial stages of the project in October last year, and now, Twitter has officially confirmed that a limited group of users will have access to a live test of its audience control options for tweets, which will enable people to restrict who can reply to their updates.

“Before you Tweet, you’ll be able to choose who can reply with three options: ‘Everyone’ (standard Twitter, and the default setting), ‘Only people you follow’, or ‘Only people you mention’. Tweets with the latter two settings will be labeled and the reply icon will be grayed out so that it’s clear for people if they can’t reply. People who can’t reply will still be able to view, Retweet, Retweet with Comment, and like these Tweets.”

The version that’s going live is slightly different from the one Twitter first presented seven months ago, which included a fourth option – ‘Statement’ – which would not allow for any replies.

Maybe Twitter felt that was too restrictive, and counter to tweet engagement. Either way, it’s not there, so it looks to have been dropped in the initial testing stage.

The aim of the option is to facilitate additional tweet discussion options – like interview-type conversations via tweet, which people can then follow without the distraction of a thousand other voices chiming in. This is one of the key use cases that Beykpour first flagged, noting that with the capacity to restrict who can join a discussion, it will make it much easier to see the key back-and-forth in a single thread.

There’s also the capability to limit bullying and abuse, or run Twitter chats with specific user groups and subsets. Yet, at the same time, the option could also lead to issues.

If people limit their replies, they can make whatever claims they like, and go relatively unchecked, at least in the direct tweet thread. Brands could also, theoretically, reduce criticism by restricting who can reply to their tweets to only those who are going to reply positively, which could result in a biased view of whatever they mention.

On this front, Twitter is also adding markers on tweets where replies have been restricted, which provides some transparency over such. 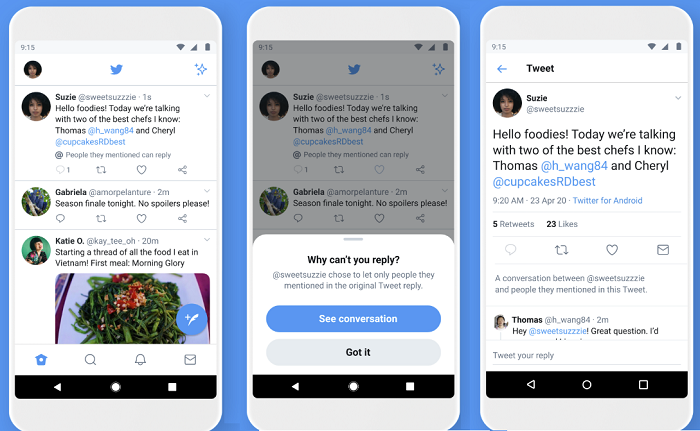 Will that be enough to quell issues?

I mean, it’s Twitter, where people go to dunk on others, and repeatedly air their many personal grievances to largely unwitting audiences. So probably not. But it’ll be an interesting test either way, and with only a limited group of profiles able to use the options initially, we could see quote re-tweets used as a weapon to expose potential abusers of the new system.

Twitter says the new reply controls are now being tested with “a limited group of people globally on Twitter for iOS, Android, and twitter.com”. Keep an eye out for them in your streams.