Twitter has once again raised the hackles of the Trump administration, this time by suspending the account of Donald Trump Jnr, the son of President Donald Trump, after Trump Jnr. shared a Breitbart video which claimed, among other things, that there is a ‘cure’ for COVID-19.

This account has not been permanently suspended. Per the screenshot, the Tweet requires deletion because it violates our rules (sharing misinformation on COVID-19), and the account will have limited functionality for 12 hours. More in our rules: https://t.co/0wHWVV5QS4 https://t.co/0gq7rlaNw7

As you can see in the above exchange, Trump Jnr’s account was suspended for 12 hours, within which time he is not able to engage or tweet on the platform.

The video itself has been removed on all major social platforms, with Facebook, YouTube and Twitter all working to detect and delete the post. The video depicts a group of people calling themselves “America’s Frontline Doctors” holding a press conference. The group, dressed in labcoats, claim that the anti-malaria drug hydroxychloroquine is ‘a cure’ for COVID-19, and inform viewers that they do not need to wear face masks.

The video has already reached over 20 million views on Facebook alone, while the clip has also been re-shared by President Trump. Those tweets have also been removed (Trump’s account was not suspended because they were re-shares, not direct tweets from Trump’s account). Trump also re-shared several other posts touting the drug as an effective treatment for COVID-19, in contradiction of official advice from the FDA.

It’s the latest in now rising discord between the Trump administration and the medium which essentially helped him win the 2016 election – something that Trump himself has openly acknowledged.

Indeed, back in May, when asked why he didn’t just delete his Twitter account, Trump explained that:

“I would do that in a heartbeat if I had fair… If we had a fair press in this country, I would do that in a heartbeat. There’s nothing I’d rather do than get rid of my whole Twitter account, but I’m able to get to, I guess, 186 million people when you add up all the different accounts […] And so if I get a story that’s wrong, I can put a social media [post] out, and the next day or the next minute or the next hour, everybody’s reading about it.”

Yet, even so, the Trump campaign is now framing Twitter as an enemy to free speech, even running new campaign ads that call for support in his battle against the platform specifically. 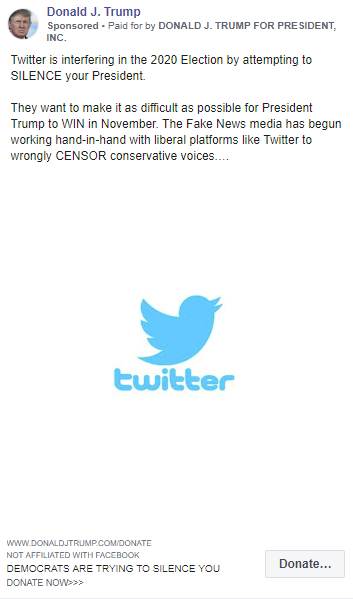 The Trump vs Twitter feud has been simmering over the past few months, but went to another level in May, when Twitter added warning labels to two of Trump’s tweets relating to the voting process. Twitter determined that these tweets could jeopardize voter participation, and its resulting action sparked the President to issue an Executive Order calling for a review of the powers which enable Twitter to make such a call on his comments.

Even before that, however, Trump had floated the idea of a panel to investigate conservative bias on social media. And while this latest action relates to COVID-19 misinformation – and as noted, all of the major platforms are taking action on this specific video – it seems that Twitter, once again, is the focus of Trump’s ire.

So disgusting to watch Twitter’s so-called “Trending”, where sooo many trends are about me, and never a good one. They look for anything they can find, make it as bad as possible, and blow it up, trying to make it trend. Really ridiculous, illegal, and, of course, very unfair!

Really, the push against Twitter is a typical approach from the Trump campaign. Trump has been able to grow his base by framing things into ‘us against them’ battles, and in sensing the conservative angst against Twitter, Trump is aligning with that in order to spark more support, reinforcing the belief that powerful players in the media space are working to keep the common person down.

This is the same approach Trump has taken against the mass media more broadly – by framing them as ‘fake news’, Trump positions himself as the only one willing to speak the truth. That then further solidifies his supporter base who believe in an embedded structural oppression, maintained by the elite who are in a position to control what’s shared.

That approach also aligns with the re-distribution of the Breitbart video – a growing number of people believe that the ongoing COVID-19 suppression measures are also part of deep state control. Such conspiracy theories are gaining significant traction through social media sharing.

Essentially, despite going against the advice of his own health advisers, and despite wearing a mask himself, and calling on others to do the same, Trump also knows that he can win more support by maintaining this core narrative. Aligning with the view of established authorities – the ‘swamp’, as Trump has labeled it – will not sit well with his supporters.

As such, the opposition against Twitter is only part of a broader debate for the Trump campaign, but it does once again underline the importance of social media in the modern media landscape, and it also, once again, puts Twitter in a difficult position, in terms of allowing free speech – especially from the President – and enforcing its rules.

We’re still waiting on the next steps in terms of Trump’s review of Section 230 laws, but it’s clear that social platforms are going to play a major role in the upcoming election.