As Clubhouse downloads continue to slow, Twitter continues to add new elements to boost the use of its own audio Spaces option, which will soon include a new, dedicated Spaces tab in the middle of the bottom function bar to improve Spaces discovery.

As you can see in this example, posted by reverse engineering specialist Jane Manchun Wong, the Spaces tab will highlight in-progress audio chats that you can tune in to as you please.

Twitter’s been developing its dedicated tab for Spaces over the past few months, with a couple of different variants in testing. 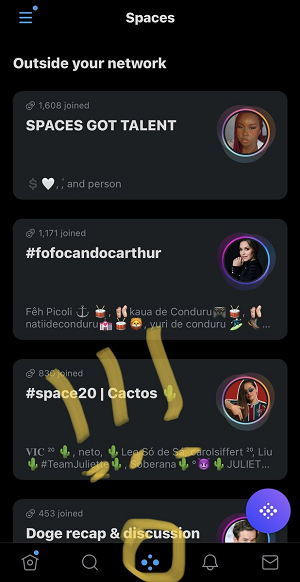 This version was posted by Twitter CFO Ned Segal last month, which Twitter then clarified was only available internally at present. The updated version, as per Wong’s discovery, has more space in the layout, and includes more information about the host/s and attendees in the info panel for each chat, along with several profile bubbles to highlight specific people in attendance.

Discovery is a key element that Twitter needs to tackle, because while everyone with more than 600 followers can now create a Space, actually finding chats to tune into, when you have a moment free, is currently a bit of a crapshoot – either you’re alerted to those attended by people in your network, or you don’t know about them at all.

Twitter is working on this, with new features that highlight when people are in audio chats (via a purple ring around their profile image in-stream), and this new tab. The next step then will be utilizing algorithm matching to highlight the chats of most interest to each individual user – which, I wouldn’t say I have a heap of faith in Twitter getting right, at least based on its current topic recommendations which pop-up in my listings.

But Twitter does need to maximize this element, otherwise Spaces will go the way of live-streaming, which launched to a heap of hype, then simmered down once everybody was able access the option, and broadcast their life, and platforms quickly became inundated with low-quality, low-effort streams of people streaming from their couches, staring down into their phone cameras in accusative glances, or users filming random streets outside, or even TV shows, on an actual TV, that they, for whatever reason, wanted to share with the world.

Audio rooms could devolve into similar, low engagement, low interest offerings, and if that’s all that people can find in the app, they’ll lose interest in the option entirely pretty quick. But if Twitter can show you the most relevant Spaces, based on your interests, and boost user engagement on an individual level, it could become a key engagement tool within the app. It’s a big ‘if’ – and again, Twitter’s algorithms haven’t proven to be highly attuned to user interests as yet. But it’s a key element, and once this new Spaces tab is available, it will be essential to unlocking the full potential of the format.

Incidentally, this is also why I think Facebook, and to a lesser degree Reddit, will have more success with the audio social tools long-term, because both platforms are looking to add their audio engagement options into groups and subreddits that their users are already members of, and are already actively engaging in. That’ll likely ensure that their audio chats are more focused on specific topics, and are more engaging, overall, for each user. But we’ll have to wait and see in this respect.

Clubhouse, anecdotally, is also struggling with this element, even at its much smaller scale, and if it’s already facing challenges at, what, 4 million total users (now with 2 million on Android), that seems like it’s going to be a significant hurdle for the platform to conquer if it has any hopes of maintaining user viability.

In addition to the development of its new Spaces tab (which currently has no scheduled release date), Twitter has also announced two new updates for Spaces to further refine the functionality of the option.

First off, it’s added the capacity to edit scheduled Spaces, so you can easily update the title, date and time of your planned audio streams. 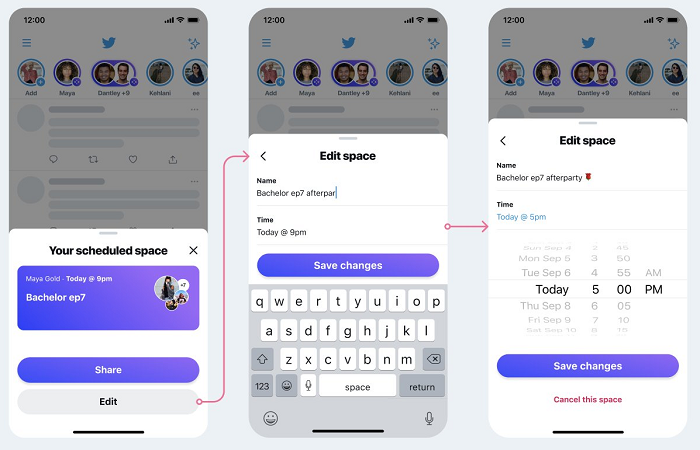 That’ll make it easier to manage your scheduled events, as opposed to having to delete and start again if any changes come up. And if the last year has underlined anything, it’s that changes will happen, no matter how well you map things out.

Twitter’s also giving Spaces hosts the capacity to remove any pinned tweets in their Space, while speakers will also now have the ability to take down their own shared tweets if they choose. 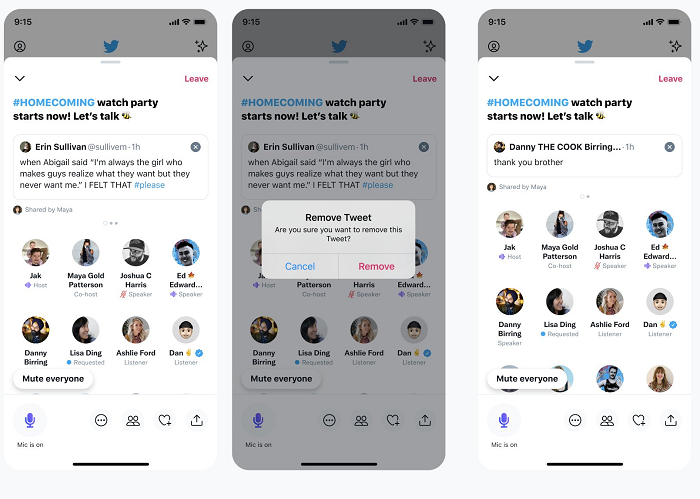 That will help to keep your discussions more focused, and clutter-free, as you look to maximize engagement around specific topics or tweets.

The evolution of Spaces has been impressive, both from a practical and functional standpoint, and has emerged as the perfect example of Twitter’s new, accelerated approach to product development, as it looks to significantly boost platform usage over the next three years.

Whether Spaces, and social audio more generally, will remain relevant long-term will come down to additions like this, providing the capacity for users to both find relevant discussions to tune into, and for broadcasters to control their streams, and presentation options, to help maximize audience engagement.

So while these might not seem like major additions and updates in isolation, they all have significant potential, while the arrival of the Spaces tab in the app – when it does eventually get a launch date – will be a big step for Twitter as it eyes its next stage of development.