With eCommerce on the rise, the growing expectation is that, eventually, everything will be ‘shoppable’, with everything you see in a video on Instagram or TikTok, or every item you see in a posted image from a Facebook Page, made available for immediate purchase within a few clicks.

And Twitter’s also looking to ensure that it doesn’t miss the eCommerce boat. Last week, during its Analyst Day presentation, Twitter pointed to various new commerce options in development. And this could be the first one, with a new Twitter card type for eCommerce that adds a large ‘Shop’ CTA button, linking through to a transaction page.

As you can see in the example, posted by Yasser Masood (and shared by Matt Navarra), the new eCommerce Twitter card includes a product title and code, along with the ‘Shop’ button. The card can also list a product price, with the displayed information sourced from the relevant product page on the businesses’ site.

Twitter has confirmed that it’s testing various commerce features, but they’re still in the early stages of development – so the above example may not be entirely indicative of what Twitter will eventually offer on this front. But new tools are coming, which will open up new opportunities.

As noted, within its various presentations in its Analyst Day, Twitter pointed to several eCommerce projects, and hinted at where the platform is headed on this front.

“On eCommerce, we get a lot of questions around where we’re at and what the plans are, and why taking so long. Sequencing is really important, and we really believe firmly that getting the performance ads business right, starting with MAP, but then moving on to clicks and conversions, is going to be critical as a prerequisite to eCommerce.”

The reference to MAP relates to Twitter’s re-building of its Mobile Application Promotion (MAP) system. Back in 2019, Twitter identified significant issues with its MAP process, which lead to impacts in its targeting and data capacity. As a result, Twitter has now re-built its MAP system, and is further refining it, which, as Falck notes, is the key focus before moving onto eCommerce.

“We know people come to Twitter to interact with brands and discuss their favorite products. In fact, you may have even noticed some businesses already developing creative ways to enable sales on our platform. This demand gives us confidence in the power of combining real-time conversation with an engaged and intentional audience. Imagine easily discovering, and quickly purchasing a new skincare product or trendy sneaker from a brand you follow with only a few clicks.”

As such, it is working on the next stage for its eCommerce tools, which will likely include new Shop buttons in tweets, as well as on-platform stores and other tools.

Which Twitter has actually tried in the past. Back in 2015, Twitter tested ‘Product and Place Collections‘ on selected profiles, which enabled some users to promote products in a dedicated profile section. 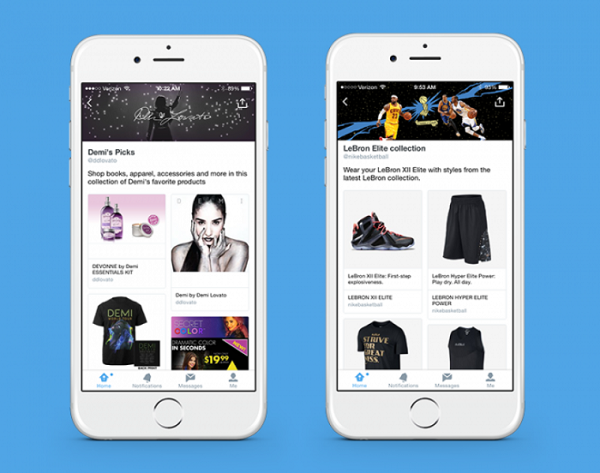 These listings included a ‘Buy on Twitter’ option to facilitate in-stream shopping.

It’s not hard to imagine Twitter re-visiting this, with connection to Shopify or other eCommerce providers facilitating on-platform purchases. Again, with Facebook and Instagram adding more shoppable items, and Snapchat, TikTok and Pinterest also developing new tools, it seems logical that Twitter, too, will add similar.

That could provide another way for businesses to connect with established audiences, and share their products for immediate purchase via tweet. It’s still in its early stages, but you can likely expect movement on this front in the near future.